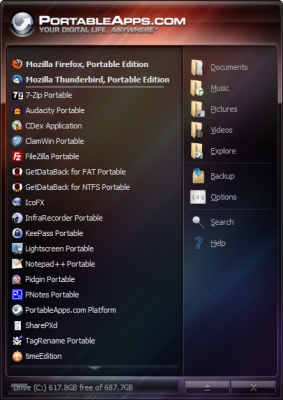 In order to run most Windows applications you’re expected to install them on your computer. This basically involves writing changes to your Windows registry and copying executable and data files to certain directories on your computer. But there are also portable versions of many apps, which you can run without installing. Instead you just unzip the apps to a folder and click the executable file to launch the app. All changes are saved to that folder — whether it’s on your hard drive or a USB flash drive which you can take with you and use on any computer.

One of the most popular software for managing portable applications is the PortableApps.com platform. Basically you get a program launcher that you can load automatically or manually when you plug your USB key into a computer. All the portable apps stored on your card show up in a start menu-style program launcher. And you have shortcuts to documents, music, pictures, and other areas.There’s also a backup utility for creating backups of your programs and data.

The developer behind the PortableApps suite is working on version 2.0, and he’s laid out some of the changes that will be involved in the new version. Those changes include:

The PortableApps.com Platform version 2.0 should be available later this month, with a beta release expected in the next week and a half.

Installing a few of your most frequently used apps on a flash drive makes moving from computer to computer a lot easier, especially if you want to be able to take your bookmarks and other settings with you when you’re using your home or work machine or your netbook. Or you could just use a browser or add-on that supports synchronizing your data between browsers over the web.