Japanese company King Jim has been selling a line of “E Ink typewriters” under the Pomera brand name for years, and now the company plans to bring its latest model to the United States.

The Pomera DM30  features a 6 inch E Ink display, a built-in keyboard, and a design that lets you fold the whole thing up for easy transport.

Thanks to the low-power, sunlight viewable E Ink display, you can type anywhere… and for a long time. The Pomera DM30 runs for up to 20 hours of battery life… and it uses AA batteries, so swapping out batteries on the go should be pretty painless.

King Jim plans to sell the Pomera DM30 in Japan for ¥ 43,000 (~$390) starting June 8th. But you can also pre-order one in the US through the company’s Kickstarter crowdfunding campaign. Prices start at ¥ 38,500 (~$349) for early backers, and the device is expected to ship to US customers in November. 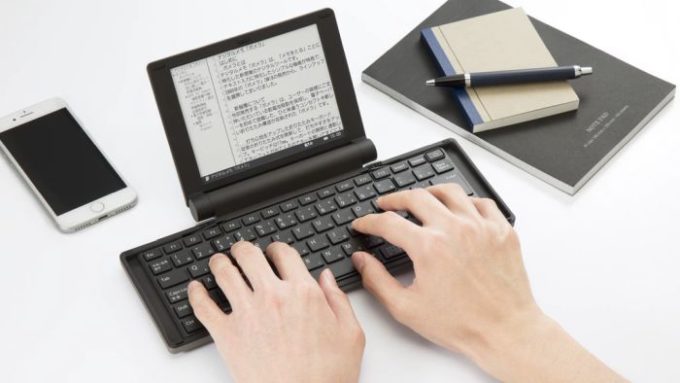 Oh, and the price for US customers will probably go up eventually. If you miss out on the Kickstarter campaign, the company says the US price is expected to go up to ¥ 55,000 (~$498).

Those prices may seem a little steep for what’s essentially a Kindle with a fold-out keyboard and removable batteries, but there’s not really a lot of competition in this space. If you’re in the market for a E Ink, distraction-free writing device you can either build your own or buy something pricey like the Pomera DM30.

Onyx did show one off last year, but the company never brought its Onyx Boox Typewriter to market.

Anyway, the US version of the Pomera DM30 allows you to choose between English and Japanese language settings, but it still ships with a Japanese keyboard layout.

It features an 800 x 600 pixel display, 8GB of storage, and a microSDHC card slot for up to 32GB of removable storage. King Jim says you can compose documents with up to 100,000 words and its software allows you to adjust the font size or line spacing, and invert the colors (so you can see light text on a dark background.

There’s also a calendar function that lets you add notes to a calendar, a basic spreadsheet tool that lets you save sheets in .csv format, and support for a few different special features including creating outlines or viewing line numbers as you type.

You can transfer documents from the Pomera to a PC or other device using a microUSB cable, a microSD card, or by converting text to a QR code that you can scan using a phone or other device.

There’s also support for wireless file transfers… but you’ll need an SD card with WiFi capabilities, since the Pomera DM30 doesn’t have any built-in wireless hardware.

In addition to support for alkaline or Ni-MH rechargable AA batteries, the system has a coin cell backup battery.

The Pomera DM30 is a niche device that’s certainly not going to appeal to everyone: you can buy a halfway decent Windows 10 or Chrome OS laptop for less than the price of a DM30. But for folks that want a distraction-free writing device that can be used anywhere, it’s nice to have the option of overpaying for this niche gadget.

(I’m kind of joking about overpaying: it’s unfair to compare this sort of device to the cost of a kindle + keyboard, since King Jim likely sells far fewer devices, which makes something like the DM30 a lot more expensive to manufacture).