Taiwan’s Polytron Technologies is developing a transparent smartphone design. The folks at Mobile Geeks got a chance to check out a prototype, and while it looks looks like little more than a few batteries sandwiched between two pieces of glass right now, the technology really does exist to make a mostly transparent phone. 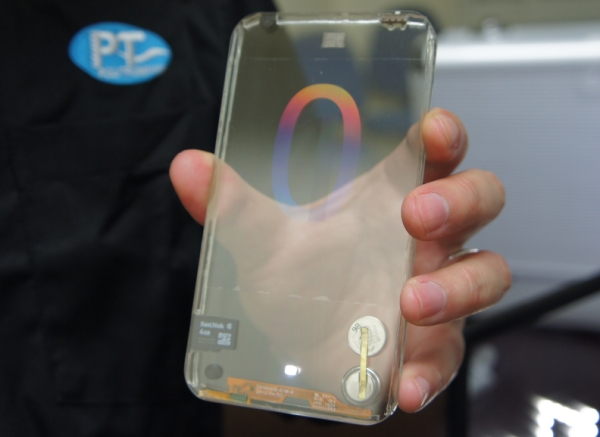 The glass is transparent, which means you can see right through the phone. But as we’ve seen several times over the past few years, that doesn’t mean that you can’t display images, video, and other graphics on the glass.

Polytron’s system uses Smart Glass which looks opaque when the power is off, but which becomes transparent when turned on.

In the prototype you can see a few components that aren’t transparent including the microSD card, speakers, and batteries. The bottom part could be darkened so you wouldn’t have to look at the visible components (although I think it’d be kind of cool to see the guts of the phone).

There’s no software (and not much hardware) in this protoype, and it could be a few years before a fully functional transparent phone is available for purchase… if one ever actually hits the market. While the idea is certainly pretty cool, I have to wonder how useful a transparent display wold be in a handheld device — since you’d probably spend most of your time staring through the phone and into the palm of your hand.

Transparent displays will likely be much more useful for in-vehicle display systems, smart glasses, and other products where you’re not expected to hold the transparent device in your hands.

8 replies on “Polytron is working on a transparent smartphone”