The Polymega is an upcoming game console that’s designed to be a modular all-in-one retro console capable of playing games from 30 different classic consoles.

Unlike most recent retro-consoles, the Polymega doesn’t come with games pre-loaded. Instead, it’s designed to let you play games using original CDs or cartridges. You can also download select titles from the Polymega Shop and install them to local storage.

Now the Polymega team has announced that their game console won’t just be stuck in the past — it’ll also support modern game streaming platforms, which will give you a way to play current games in addition to older titles.

Details are a little light at the moment — it’s unclear which game streaming platforms Polymega is talking about. But there are a growing number of players in this space, including Google, NVIDIA, and Microsoft. So it’s not like Polymega doesn’t have options.

Game Streaming typically involves using a remote server to actually do the hard work of rendering a game’s graphics, so you don’t need particularly powerful hardware to play at home. You just need a strong internet connection and a decent game controller.

The Polymega should have both. The game console consists of a Base Unit with a CD drive for games from CD-ROM based systems like the Sony PlayStation, Sega Saturn, or TurboGrafx-CD. It also comes with a universal wireless controller with a 2.4 GHz wireless dongle and support for USB charging.

But the game console also supports expansion through optional “Element Modules” that allow you to play games designed for cartridge-based systems like the NES or Sega Genesis. Each Element Module comes with a wired game controller specific to the system it’s designed to emulate, there’s support for an optional light gun (hello Duck Hunt), and the modules also come with five classic games. 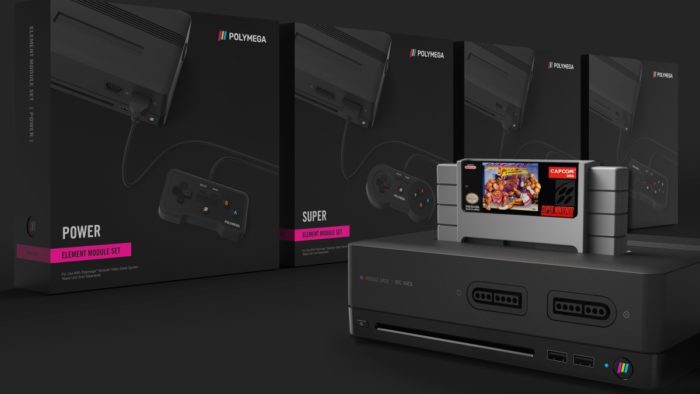 Users will also be able to download select titles from the Polymega Shop. The company says downloadable games will sell for around $4 to $6.

The game console itself isn’t exactly cheap though — the Polymega Base Unit is available for pre-order for $400. You could get an Xbox One X for that price… but you wouldn’t be able to run cartridges on it.

Polymega says it’s completed an initial beta test and plans to begin shipping Beta 2 units to more testers this week. Retail units could ship later this year… but the exact date hasn’t been announced yet, as the project’s already been hit by several delays.