Polaroid may be best known for making cameras… and this year the company has a rather intriguing mirrorless camera running Android 4.1 on the way. But the company has been offering low-cost Android tablets since last year.

So far we haven’t seen particularly good tablets from Polaroid. But the company does know how to make a cheap tablet — at one point there was a Polaroid tablet with Android 4.0 selling for $100.

Now Polaroid is showing off a new line of tablets with slightly better specs and starting prices of $129. 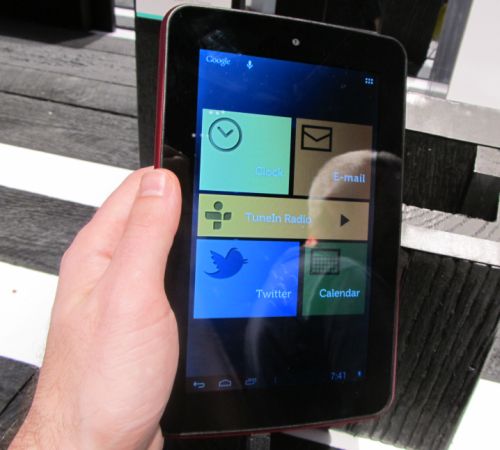 The Polaroid Booth at CES is filled with tablets in a range of sizes. There’s a 7 inch model, an 8 inch model, and a 10 inch tablet.

When I got a chance to test the tablet, it seemed reasonably fast… but the screen viewing angles were underwhelming.

There are a few things to like about this tablet. It has an HDMI port and SD card slot. It’s a Google Certified device with the Play Store, Google Maps, and other Google software. And it runs Android 4.1 Jelly Bean. The back of the tablet also has a pretty attractive matte red and black finish.

But even if the Polaroid tablet has features that some other tablets lack, the budget tablet space is pretty crowded at this point, and it’s hard for a company to stand out or compete with major players like Amazon and Google/Asus.

Polaroid is also showing off an 8 inch tablet which looks nearly identical to the 7 inch model, but which has a 1024 x 768 pixel display.

The best thing I can say about these tablets is probably that they all look better than the models Polaroid was showing at CES last year. That seems to be a trend as CES 2013: The crappy tablets are less crappy than they used to be.

We should see at least some of these tablets hit the streets in a few months.

Polaroid also claims to have models with higher-resolution, 1280 x 800 pixel displays, but either the spec sheets at the Polaroid booth were wrong, or the models the company is showing off at CES aren’t the final products, because most tablet had lower resolution screens.