A few months ago Google announced that it would be rolling out support for podcasts in Google Play Music. Now it looks like the wait is almost over. In fact, it’s already over for some users.

Last night popular podcaster Bill Simmons seems to have spilled the beans in a now-deleted Twitter post, saying that Google Play Music podcasts would be launching in February.

But as Android Police discovered, it looks like some people already have access to podcasts. And they’re not the only ones. 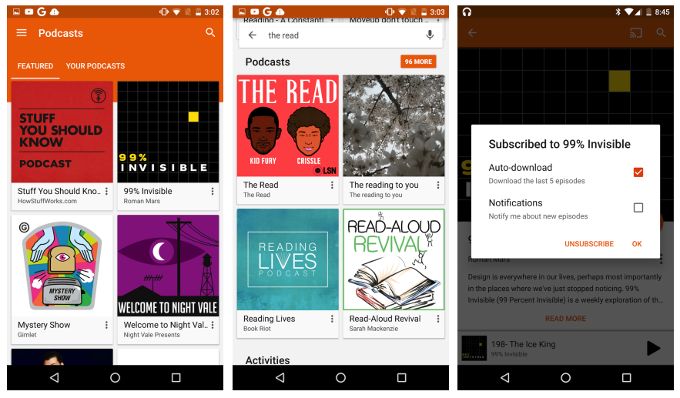 Google has a habit of rolling out some new features and services to a handful of users ahead of a wider rollout, which probably explains why some people are able to subscribe and listen to podcasts using Google Play Music while most people have to wait a little longer.

Android Police has published some pictures that show a user interface that should look familiar to anybody that already uses Play Music for, well… music. What’s new is a tabbed interface that lets you quickly see either the podcasts you’re subscribed to or “featured” podcasts, which could help you find something new to listen to.

One potential pain point? Right now there’s no way to search for just podcasts. So when you search for Serial or WTF, you may end up with music and podcast results mixed together.

There’s no shortage of podcast apps for Android, iOS, and other platforms. I’ve been a long-time BeyondPod user, but I know a lot of folks swear by Pocket Casts or other options. But including podcasts in the default music app for millions of phones could give a lot of podcasters new exposure, while letting users manage their media in one place.

Incidentally, having launched the new LPX Show a little over 24 hours ago, it’s already available in Stitcher and Pocket Casts, and Google has already sent me an email letting me know that it’ll be available as soon as Play Music podcasting goes live.

I’m still waiting to hear back from Apple about inclusion in iTunes though.

If you haven’t checked out LPX yet, you can give the first episode a listen, or subscribe to our RSS feed using your favorite podcatcher app.