Most of the eReaders released in the past two decades have featured black and white E Ink displays. But this could be the year eBook readers with color displays become a thing.

The upcoming PocketBook Color eReader will have a 6 inch E Ink Print Color display with a resolution of 300 pixels per inch and support for displaying 4096 colors. 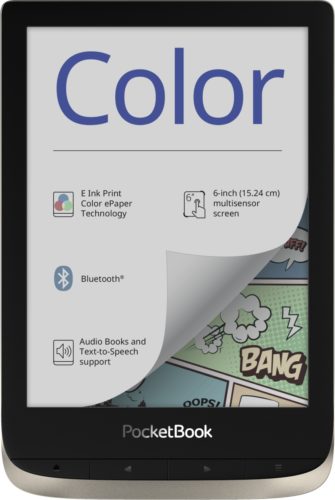 While that’s just a fraction of the color depth you’d get from the LCD or AMOLED displays found on smartphones, laptops, or tablets, it’s a big step up from the 16 shades of gray available from most Kindle, Nook, and Kobo devices.

Color could come in handy for reading magazines, comics, textbooks, and picture books on an eReader.

E Ink’s Print Color technology has many of the benefits of the company’s grayscale displays:

Some people also say that they feel E Ink displays cause less eye strain. Personally I like using a dedicated device to read eBooks, since I’m less likely to be distracted by incoming notifications while reading.

PocketBook says its color eReader will be available in the third quarter of 2020 and that specifications will be disclosed closer to that time.

German news site Heise says the PocketBook Color will sell for 200 Euros (about $220).

3 replies on “PocketBook Color eReader heading to Europe this year”