Plex is a popular media center app which lets you navigate photos, music, and movies on a computer — or stream that content to other devices including phones, tablets, smart TVs and set-top boxes.

Up until recently the Plex team’s Android app was functional, but kind of dull. But that will change when a brand new Plex app hits the Play Store this week. It’s been rewritten from the ground up to follow Google’s design guidelines… and includes a lock screen widget, notifications, and much more. 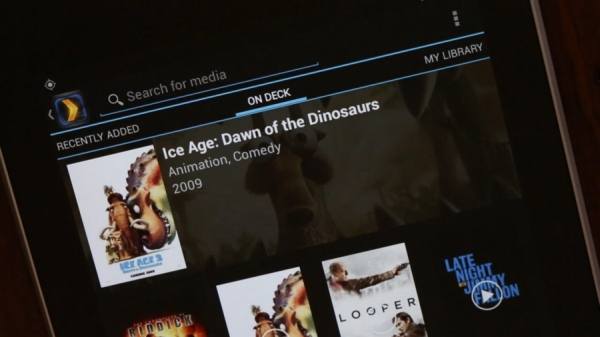 The new Plex app for Android will be available for devices running Android 3.2 or later, and in addition to streaming content from your desktop computer to a mobile device you can use it to stream online video — or even to sync video (which is a fancy way of saying download content from your PC or from the web so you can watch it even when you’re offline).

Plex for Android is also getting the ability to act as a media server for the first time. That means you’ll be able to use your phone to access media on your tablet, or vice versa.

Plex for Android from Elan Feingold on Vimeo.

A beta version of the new app will hit the Play Store this week, but you’ll need to be a PlexPass subscriber to use it. Once the app is out of beta, it’ll be available as a free upgrade for existing users. New users will be able to pay to download the latest app once it’s available.

There are plenty of other apps that let you stream content from your PC or the web to an Android phone or tablet, but not too many will also turn your device into a media server. Plex is also known for supporting a variety of streaming protocols (so iPhone and Android users can connect to the same server), and the new user interface is pretty slick.

2 replies on “Plex for Android gets a makeover: Turns phones, tablets into media centers (and media servers)”