Plex has added support for Google’s Daydream virtual reality platform, which means you can put on a Daydream View headset, fire up the Plex VR app, and watch your movies, TV shows, and other videos on a virtual movie theater-sized screen.

If you’re not familiar with Plex, it’s a media center application that lets you organize and play audio and video files on a wide range of devices. You can install Plex Media Server on a PC to stream your files to a smartphone, tablet, or smart TV. I’ve got the media server running on my Network Attached Storage Device so I can use it even when my work PC is turned off.

Now that Plex VR for Daydream is a thing, you can also interact with your content while using a VR headset. 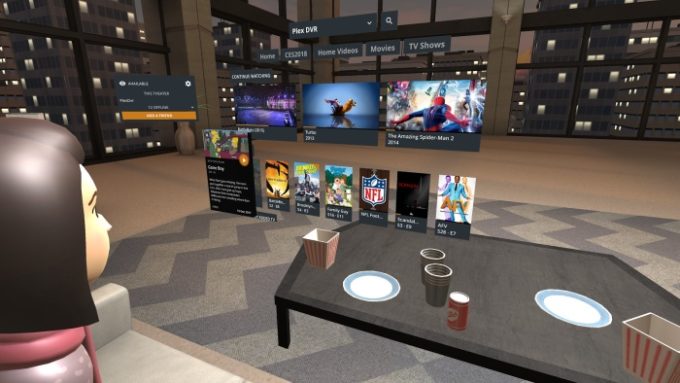 Plex VR lets you stream content from a Plex Media Server or play local videos stored on an Android phone, including 3D, 360-degree, or 180-degree videos.

The mobile app displays the Plex user interface in a large format that’s easy to interact with using a Daydream controller. And like most VR cinema apps, you don’t just get a virtual big screen to look at, you also get to hang out in a fake apartment so that you’ve got something to look at if you glance away from the screen. There’s also a drive-in movie theater view.

One kind of nifty feature is multi-user support. Up to 4 people can stream the same videos at the same time to make watching videos in VR a little more social. You’ll also see avatars for the other folks as they watch, so it looks sort of like you’re hanging out on the couch with them and you can see their head positions in real-time to see what they’re looking at. And you can press a button on the remote to talk to other users in real-time.

Plex VR streaming is free for all Plex users, and co-watching is available to everyone for free for the next week. After that you’ll need a Plex Pass membership to continue using the co-watching feature.

If you’d rather use Plex on a high-end VR headset like an Oculus Rift or HTC Vive, there’s also a $10 app called Plevr that lets you do that. It was originally created as a third-party application, but Plex recently hired the developer of Plevr “to join us full-time in building great stuff.”