PlayOn is adding support for Google’s Chromecast to its media server software. That means you can now stream content to a Chromecast from dozens of services that wouldn’t otherwise support Google’s media streamer, including Comedy Central, Hulu (without Hulu Plus), and more.

There are a few catches though. PlayOn uses your PC as a media server, so while you can control media playback from your phone or tablet, you’ll need to have your PC running while you’re watching videos. And while the PlayOn app is free, you’ll need an annual or lifetime subscription to use it. 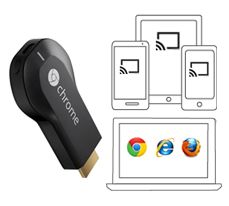 PlayOn started beta testing Chromecast support in March. Now the service is available to all customers.

PlayOn costs $30 per year or $60 for a lifetime subscription. There’s a 30-day money-back guarantee, so you can get a refund if the service doesn’t meet your needs.

Once you’ve installed PlayOn on a PC you can use the app to stream content to a variety of devices including a Roku, Wii, Xbox, PlayStation, or many DLNA-compliant devices while using a phone, tablet, or web browser as a remote control.

PlayOn works with Amazon Instant Video, Netflix, Hulu, ESPN, CNN, Adult Swim, most network TV websites, and many other sources. All told, there are more than 100 channels of content.

The company also offers a PlayLater service which acts like a DVR for internet video, letting you save videos to watch later when they may no longer be available online (or when you may not have a reliable internet connection). Right now you can pick up a PlayOn and PlayLater lifetime subscription for $70.

While using PlayOn is a little more complicated than just firing up an app on your phone and hitting a button to send video to your TV, the service takes advantage of the fact that many online video sites such as Hulu allow users to stream content from the web to a PC for free while charging an additional fee to stream to mobile devices. Since the PlayOn media server is running on a PC, it’s a sort of workaround for bypassing that type of restriction.

It also provides a way to beam Amazon instant Video to a Chromecast even though Amazon doesn’t officially support Chromecast and doesn’t offer an Instant Video app for Android devices other than Kindle Fire tablets.

2 replies on “PlayOn brings more than 100 channels to Chromecast”