It’s 2021 and some handheld gaming devices have OLED displays. Others are basically full-fledged PCs running Windows or Linux. And others… have a black and white display and a hand crank.

The Playdate is an unusual gaming device first unveiled in 2019, and after it’s finally available for pre-order for $179. The first batch of 20,000 units will ship to customers later this year, but that batch of Playdate devices sold out shortly after orders opened, so folks who place an order now won’t receive one until sometime in 2022. 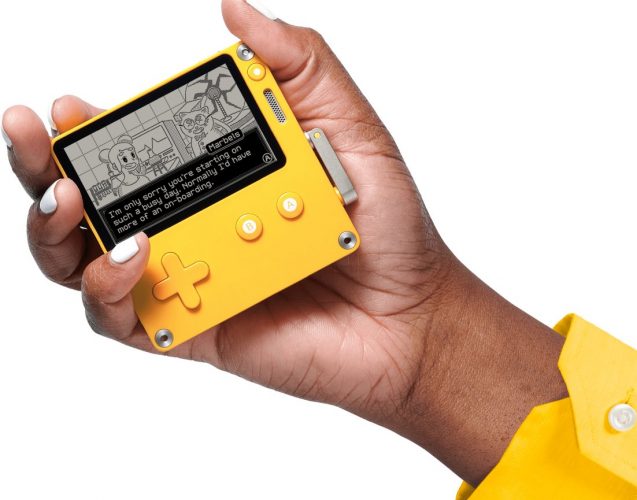 The Playdate is designed as a sort of homage to a simpler time in gaming. It has basic graphics, a sunlight readable display, and only a few buttons… but it also has that hand crank which enables a different sort of gaming experience than any other device.

It’s also not designed to play existing games. Instead Playdate has tapped developers to create new experiences just for the platform. And they’ll roll out to users over time. The idea is to offer “season” of games, and the first season consists of 24 games, with users getting access to 2 new titles every week.

The company plans to offer additional seasons in the future for customers willing to pay a fee. But you can also make your own games or sideload games created by other users.

It’s all a rather novel idea… but the Playdate handheld certainly stands out. It’s not that much cheaper than a Nintendo Switch Lite, but you can be certain nobody is going to confuse one console for the other.

Playdate says it will ship the first batch of 20,000 units to customers by the end of the year, with additional units shipping in the beginning of 2022. Folks who place a pre-order starting this month will be charged full price, but the company says it will offer full refunds to anyone who cancels an order.

Playdate will also offer a series of optional accessories. The previously announced Playdate cover will be available for pre-order at the same time as the handheld game system, but the Stereo Dock accessory that works as a Bluetooth speaker/battery/charger won’t be available until some time later.

2 replies on “Playdate is up for pre-order, ships in late 2021 (handheld gaming with a hand-crank)”