The RetroN Sq started as a joke. In 2017 gaming accessory maker Hyperkin tweeted a drawing of a device that would let you play games from Game Boy cartridges on a TV. But that tweet came out ahead of April Fools’ Day and the company initially had no plans to release a real product with that functionality.

And then… Hyperkin decided to do it anyway. Last year the company announced it would make a retro game console that brings Game Boy cartridges to the big screen. And now it’s a real thing you can buy. 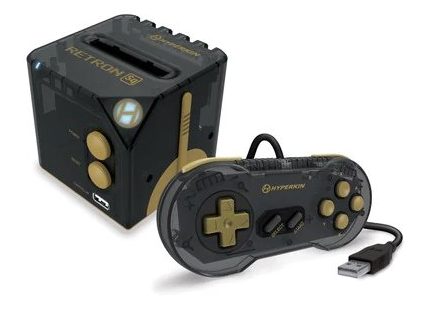 In a nutshell, the RetroN Sq is a small cube with a slot in the top for Game Boy cartridges. Out of the box it should support both Game Boy and Game Boy Color cartridges, but there’s also beta support for Game Boy Advanced titles.

While games for these handheld consoles were meant to be played on small, low-resolution displays, the RetroN Sq can upscale content to 720p resolutions at 4:3 or 16:9 aspect ratios.

The system also also has a memory card slot which can be used to install firmware updates, and Hyperkin ships the device with:

One thing to keep in mind is that while the RetroN Sq is designed to play Nintendo games, it is not an official Nintendo product and it uses open source software to bring classic cartridge games to the big screen.

The RetroN Sq comes in two color options: black and gold, or “hyper beach” with a aquamarine, black, and pink color scheme.

5 replies on “Play Game Boy cartridges on your TV with RetroN Sq (up for pre-order now, ships in March)”