The Cosmo Communicator is a pocket-sized device that has a clamshell-style design that lets you use it like a tiny laptop. Flip open the lid and you’ve got a 6 inch touchscreen display and a QWERTY keyboard.

But the Cosmo Communicator is also a smartphone. Close the lid and you can hold it to your ear to make phone calls.

If the design looks kind of familiar, that’s because the Cosmo Communicator is basically the 2nd-gen version of the Gemini PDA which hit the streets earlier this year following a successful crowdfunding campaign in 2017.

Planet Computer is taking pre-orders for the new model through an Indiegogo campaign, and hopes to begin shipping the device to backers in May, 2019. 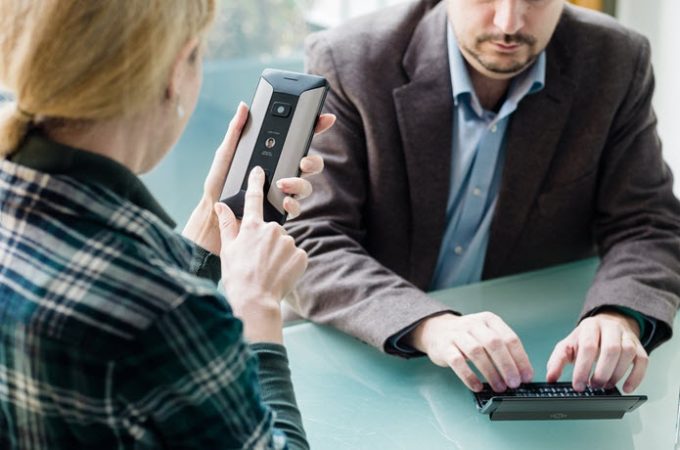 The suggested retail price for the new model is $799, but pre-orders are going for $549 during the crowdfunding campaign.

Here’s how the new model is the same as its predecessor:

Here’s are some of the things that are new in the Cosmo Communicator:

The new model features a MediaTek P70 octa-core processor with ARM MaliG72 MP3 graphics, 6GB of RAM, and 128GB of storage plus a microSD card slot.

For the most part that seems like a step up from the MediaTek X27/4GB/64GB found in the Gemini PDA. But the biggest change is likely to be the addition of a secondary screen that lets you interact with the phone without flipping it open.

The external display lets you answer phone calls or control the camera. The fingerprint sensor on the front also lets you unlock your device without opening it. Along with the upgrade camera upgrade and NFC support, these features make the Cosmo Communicator seem like a device that you might actually want to use as smartphone replacement rather than a smartphone companion.

On the one hand, the Cosmo Communicator is the kind of ambitious crowdfunding project that I typically view with skepticism/cautious optimism. On the other hand, the company largely delivered on its promises for the Gemini PDA, so it stands to reason that the next version could be a real thing that you can get your hands on next year.

Here’s a run-down of the device’s specs:

Update: Charbax from ARMDevices.net has posted video interviews with Planet Computers CEO Janko Mrsic-Flogel and designer Martin Riddiford. You can get a better look at the prototype and an idea of the thinking that went into the updated design by checking out both videos.