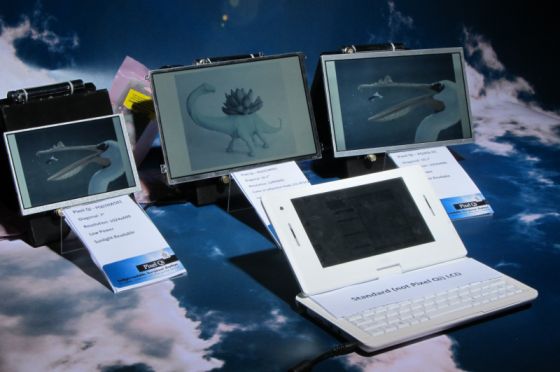 Pixel Qi makes LCD displays that can be viewed outdoors in direct sunlight using nothing but ambient light. In full color LCD mode they still look better outdoors than a typical screen, but you can also cut the backlight entirely and use the screens in a high-contrast, nearly black and white mode that uses as much as 80 percent less power.

The photo above shows a computer with a standard LCD display in the foreground and three Pixel Qi screens in the back. In the shade, they all look pretty much alike. But in bright light, you can still see the Pixel Qi displays.

The company has been showing off its display technology for the past few years, but few consumer products have shipped with Pixel Qi screens. The Notion Ink Adam tablet was available with an optional 10 inch, 1024 x 600 Pixel Qi screen, and the OLPC XO 3.0 tablet will also be available with a Pixel Qi display. But the display company has also had success with more specific markets where outdoor readable displays are a necessity rather than an option.

For instance, military tablets with GPS have been used by paratroopers who need to land on the ground and situate themselves immediately without first looking for shade. Pixel Qi has also been talking to companies interested in using sunlight readable displays in cars, trucks, tractors, and other motor vehicles.

At CES, Pixel Qi is showing off the same three screen sizes and resolutions as last year:

But the company has improved viewing angles and reflection. The screens still don’t have the best viewing angles around. If you look at the display from too sharp an angle, colors will wash out — but that’s not a problem that’s unique to Pixel Qi. While some high-quality devices with IPS displays can be viewed from nearly 180 angles without any loss of clarity, many other cheaper displays offer poorer viewing angles.

Pixel Qi doesn’t have any major new design wins to talk about this year, so it could be a while before we see any commercial products on the market in the US with the company’s displays.

But there were a few nifty demos. In addition to the Sol Computer Windows tablet I checked out earlier this week, the company is showing a 10 inch Chinese tablet with a glossy screen, and a pretty slick looking reference design from Renessas. 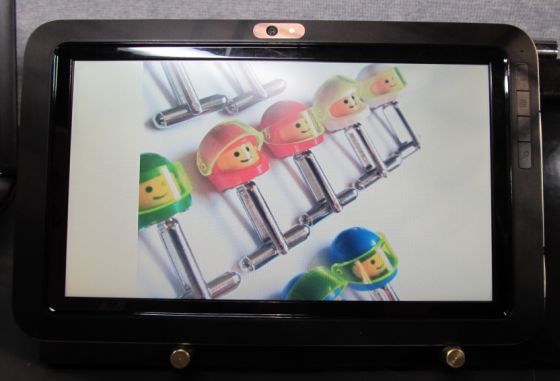 The reference tablet features a matte case and a matte display which reflects much less glare than the glossy screens we find on most tablets. There’s also an IR touch controller instead of a capacitive or resititive touchscreen. This makes the device feel more like an eReader than a tablet. 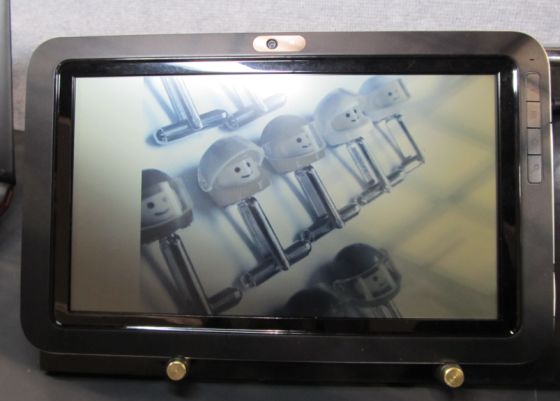 Some of the implementations of Pixel Qi we’ve seen in the past have suffered from glossy screens or other overlays that have led to a less than ideal experience. While it’s easy to think of a display as a single piece of glass, there are actually multiple layers including the touch panel.

Pixel Qi has a demonstration of one of its 10 inch screens with a number of different types of glass on top. It’s hard to see from th photo, but some screens diffuse the images differently than others which can change the way text, images, or colors are produced.

One product that has yet to see the light of day, so to speak, is the ZTE Light tablet which was announced almost a year ago. It was supposed to have a 7 inch Piel Qi screen, a 1 GHz processor, and Google Android.

At the time the 7 inch screen wasn’t ready for prime time, though. It’s unlike that we’d see that specific tablet released now that the screens are available, but Pixel Qi says ZTE is still testing its displays so a future 7 inch tablet from the Chinese tablet maker isn’t out of the realm of possibility.

In the future we could also see smaller displays for wrist computers or smartphones or other technology altogether from Pixel Qi. One of the company’s biggest accomplishments is the fact that it’s managed to develop a process for developing unusual displays using existing LCD fabrication processes.

Pixel Qi doesn’t have its own manufacturing facilities, and instead works with the companies that make LCDs for much bigger companies, cranking out tens of thousands of Pixel Qi displays and then quickly switching gears to make standard screens.

One reply on “Pixel Qi sunlight readable displays at CES 2012”