Pixel Qi‘s display technology allows you to seriously reduce power consumption when you cut off the backlight and use a tablet or notebook in high contrast, black and white mode. So while a 10 inch Pixel Qi screen uses around 2.5W of power in full color mode, it uses closer to 0.5W in black and white mode.

ARMDevices spoke with Pixel Qi founder Mary Lou Jepsen recently and she suggested that this means you could theoretically power a tablet computer with a small solar panel that generates just 1W of energy. 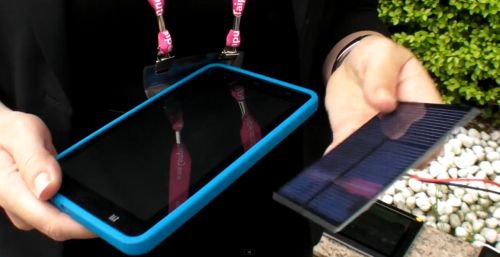 That’s because a low power ARM-based processor and all the rest of the components in a tablet could use as little as half a watt. The screen is typically one of the most power-hungry components of a mobile device.

The technology probably wouldn’t make it into mainstream consumer products in the US, but I could see it filling certain niches. People who spend a lot of time camping or hiking would probably be in the market for this sort of device, as would anyone else who likes the idea of being able to run or charge a tablet without relying on fossil fuels — and who has ample access to sunlight.

But the biggest advantage would probably come if tablets were deployed in developing nations where access to electricity isn’t reliable.

You can check out a short video after the break. Unfortunately there’s no actual prototype of a solar powered Pixel Qi tablet yet, just a discussion of how it could work.