Pixel Qi’s display technology combines some of the best features of an LCD screen with those of an E Ink display. With the backlight on a Pixel Qi display can handle a full range of colors and full motion video. Cut off the backlight and you get a high contrast display that’s almost black and white and which you can view in direct sunlight. Oh yeah, killing the backlight also reduces power consumption by about 80 percent. 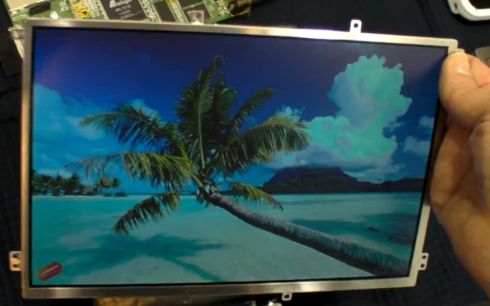 The company has been showing off 7 and 10 inch displays for the last few years, but so far only a handful of products have hit the streets with Pixel Qi technologies such as the Notion Ink Adam tablet and Clover SunBook netbook. And while we saw a 7 inch, 1024 x 600 pixel display prototype in January, so far the only panels showing up in the market are 10 inch, 1024 x 600 pixel screens. While that’s still the resolution used by most netbooks, most 10 inch tablets running Google Android 3.x have higher resolution screens.

So as expected, Pixel Qi is now showing off a new 10 inch, 1280 x 800 pixel display. Engadget reports that the new screens look a lot sharper, as you’d expect. But they’re also not as bright at the moment, although Pixel Qi is still working on display brightness. The new screen is also thinner than the company’s earlier models. It’s expected to ship toward the end of 2011.

Pixel Qi also expects to start shipping samples of its 7 inch display during the third quarter of the year.

Charbax from ARMDevices caught up with Pixel Qi founder Mary Lou Jepsen and shot a hands-on video with the company’s latest displays. You can check it out after the break.