A few years ago a leaked Samsung roadmap suggesting the company was working on 3840 x 2160 pixel smartphone displays which could launch in 2015. Now there are reports that the crazy high-res screen is real and it could show up in the Samsung Galaxy Note 5 smartphone which will probably launch this fall. 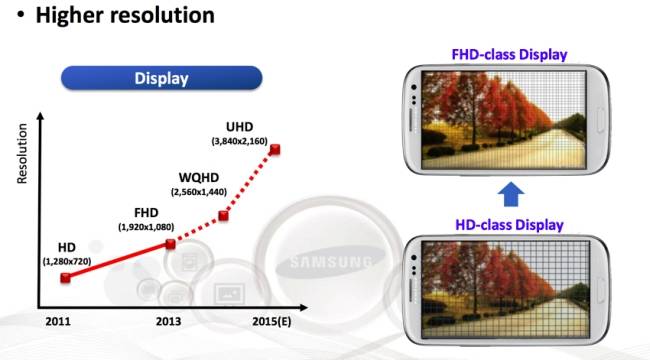 The Galaxy Note 5 is said to have a 5.8 or 5.9 inch display, which means the screen would have about 750 pixels per inch, give or take a few pixels.

Every few years we seem to have a conversation about how many pixels is too many… when the first phones with 1920 x 1080 pixel displays arrived many people wondered if it was a marketing gimmick or if people would really be able to tell the difference between a 1080p smartphone screen and one with a 720p display.

Of course, phone displays have also been getting bigger and bigger. A 6 inch phone with a 720p display won’t look as sharp as a 4 inch model. So it makes sense to pack more pixels into a larger screen in order to keep things looking crisp.

But at a time when most people don’t even have 4K TVs, a smartphone with an Ultra HD display sure seems like it could be overkill.

What do you think? How many pixels is too many? For the purposes of this poll, let’s assume the phone has a 5.8 inch screen.