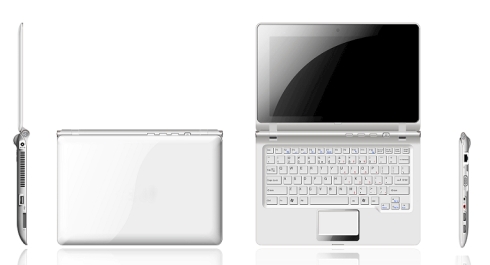 Australian computer vendor Pioneer is updating its line of mini-laptops with the DreamBook Lite A11 Ultra Slim.As the name would suggest, this is a rather thin and light machine, weighing in at just 2.7 pounds and measuring 10.7″  x 7.6″ x 1.1″. That doesn’t make it the thinnest netbook I’ve seen, but considering the A11 packs an 11.1 inch, 1366 x 768 pixel display, it’s not bad.

The company is also selling a laptop with a 13.3 inch screen and NVIDIA ION graphics. The DreamBook Light T11i ION Ultra Slim has a 1.6GHz Intel Atom N230 CPU and NVIDIA GeForce 9400M graphics. This model also has a DVD-RW drive and other things you wouldn’t expect from a netbook, but that’s because at this size it’s hardly a netbook. But the fact that the company does have an NVIDIA ION machine under its belt makes me wonder if there are any plans to release a model with the same graphics chipset but a smaller screen and case.