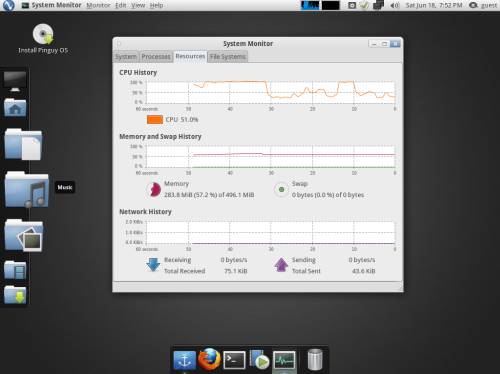 Pinguy OS is a Linux distribution based on the uber-popular Ubuntu Linux. But it’s designed to be even easier to use, especially for peopl ewho aren’t familiar with Linux. For instance, if you click on an ISO file in Ubuntu, a file browser opens and shows you what’s inside. Do the same thing with Pinguy, and a disc burner opens, pretty much the way you would expect.

As an added bonus for anyone not that happy with Ubuntu’s move from the Gnome desktop environment to the new Unity interface, Pinguy OS is based on Gnome.

The full version of Pinguy comes with a number of applications preloaded so that most things should just work out of the box.  But the installer weighs in at 1.7GB. If you’re looking for something a little lighter, the developer recently launched Pinguy OS Mini.

It includes the same user-friendly tweaks and comes with support for Adobe Flash, DiVX videos, and other media codecs and software that aren’t present in a standard Ubuntu installation. But most of the apps that are pre-installed on Pinguy OS are stripped from the Mini edition, which brings the disc image down to just under 700MB.

The operating system has an attractive layout, with an application dock at the bottom of the screen and a second dock on the left side of the screen for frequently used locations. There’s a system monitor built into the panel at the top of the screen which gives information at a glance. Of course, you can customize the look and feel of the operating system and user interface, but the default layout seems like it would work well on computers with small screens.