There are several companies working to bring smartphones running free and open source, GNU/Linux-based software to market this year. The PinePhone is likely to be the cheapest… and one of the first to ship.

At the start of the year, Pine64 announced plans to build a $150 smartphone, and they’ve been releasing status updates throughout the year. Now the company says it’s manufacturing a “small batch of PinePhones” and will begin shipping them to developers this month.

Early adopters will have a chance to buy one later this year, and the company plans to begin large-scale production in March, 2020. 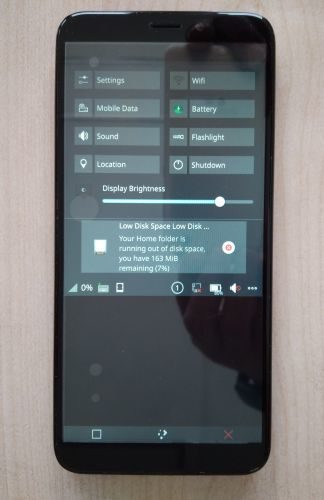 Pine64 says the phones it will ship to developers are “nearly identical” to the version that will ship to early adopters and other customers starting later this year. There may be some small changes to the printed circuit board and antenna calibration, but the basics are pretty much done.

Pre-orders are now open for developers with experience working on Linux-on-phone software, because the goal is to ensure that the phone will support operating like Ubuntu Touch, SailfishOS, LuneOS, and postmarketOS by the time it’s available to the general public.

Here is a video of the @thepine64 #pinephone too! 🙂 pic.twitter.com/7deR4KSH1d

Pine64 plans to begin producing the “Brave Heart” early adopter editions in mid-October and they’ll begin shipping to customers in November. Why Brave Heart? Because these will ship without an operating system installed and may still be buggy — Pine64 is hoping folks who buy these phones will be interested in helping debug, run test builds of software, and try out daily or weekly builds of operating systems that can boot from an SD card.

One of the key reasons Pine64 was able to build a near-final product just 11 months after committing to the project is that the company has been selling laptops and single-board computers with similar specs for years. The PinePhone is certainly a new form-factor for the company, but under the hood it has a board with the same Allwinner a64 quad-core processor as a PineBook laptop or Pine A64(+) single-board computer.

But it’s also an inexpensive, hackable device designed to run free and open source software. It also features hardware kill switches for disabling the wireless features, speaker, microphone, and USB port. And it has a bunch of features many modern flagships lack, including a removable 3,000 mAh battery, a headphone jack, and a microSD card slot (you can also boot from an SD card).

The phone also has a few modern touches, such as a USB-C port that supports data, charging, video output, and Ethernet connectivity.

And unlike most smartphones, it’s designed to be repairable — components that aren’t soldered the motherboard are held together with Phillips-head screws and very little adhesive, making it fairly simple to remove and replace a camera or other parts. Pine64 says it takes about 5 minutes to completely disassemble a PinePhone — although the company recommends against disassembling the LCD and touch panel, since it’s a little tougher to do that safely.

Pine64 says replacement batteries can be picked up for about $10 from a variety of sources, and the company will offer replacement parts for batteries and other components through its website when large-scale production begins in March.

Meanwhile the folks at Purism are taking a slightly different approach with their Librem 5 smartphone, which is also set to begin shipping soon.

It’s a 5.7 inch smartphone with an NXP i.MX8M processor, 3GB of RAM, 32GB of storage, 13MP and 8MP cameras, and hardware kill switches. But while Purism also wants to let users choose the software that runs on their phones, the company is investing a lot of time and effort into developing its own PureOS software and services.