The PineNote is a tablet with a 10.1 inch grayscale E Ink display and pen support. It’s designed to be a hackable, Linux-friendly device and it’s one of the latest products from the makers of the PinePhone and PineBook line of devices.

First introduced last summer, the PineNote began shipping to developers in limited quantities in December. Now it’s available for anyone to purchase for $399 – no invitation required. But it’s probably only a good idea to buy one if you’re a developer or very early adopter because there’s very little software available for the PineNote so far. 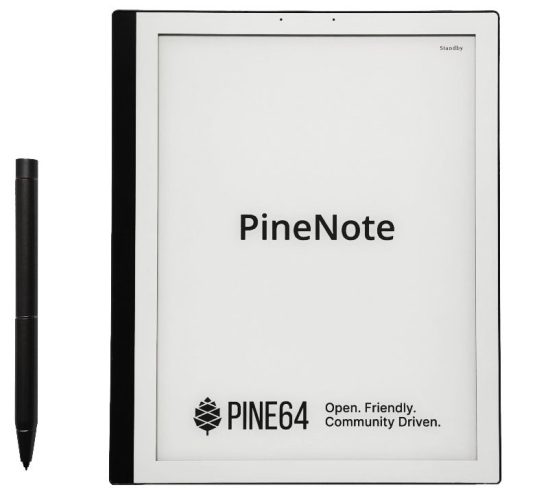 At this point, Pine64 is shipping the PineNote without an operating system installed. It will have only a bootloader, allowing developers and enthusiasts to load their own software. And since there aren’t really any pre-built disk images available, you may have to build an OS from scratch.

That said, developers have already made some progress in getting builds Alpine and Debian Linux to run on the E Ink slate, and according to Pine64, there are ports for NixOS and other operating systems on the way.

There’s already a partially working display driver, but it’s still a work in progress. The goal is to allow developers to port mainline Linux operating systems and applications to play well with a monochrome display with a slow refresh rate.

So this is it, this is my @thepine64 #PineNote running #ArchLinuxARM and #XFCE desktop.

There are still many things that needs to be done, even booting without UART isn’t possible yet. But it’s getting there. pic.twitter.com/ViAZoQtSlZ

Developers have also figured out how to enable support PineNote’s touchscreen, audio playback, and USB port, making it possible to use USB keyboards, storage devices, and other peripherals. But at this point some hardware is still unsupported – no operating system works with the tablet’s microphone or Bluetooth radio yet.

Here’s a run-down of key specs for the PineNote:

The tablet comes with an EMR pen, a protective cover, and a USB Type-A to Type-C adapter. But again, at this point it’s really intended for developers and enthusiasts comfortable using a device for which there isn’t yet any fully functional software, and which ships without an operating system pre-installed.

This blew our socks off — #PineNote‘s e-paper display now works on mainline #Linux! 🎉

Thanks to Samuel Holland (https://t.co/5X6z7vQfNd) as well as other contributors for this incredible achievement. pic.twitter.com/SY16yTuN2w

That said, the more developers who get their hands on one now, hopefully the sooner the PineNote will becomes a viable consumer-friendly device for folks who want an ePaper tablet capable of running free and open source software.