The PineBuds Pro are true-wireless earbuds with support for active noise cancellation, touch controls, and a charging case with a USB-C port and LED battery status indicator. And like most of Pine64’s devices to date, they support user-flashable firmware, allowing you to customize the performance and behavior of the earbuds.

Pine64 first announced the earbuds in April, the PineBuds Pro are now available for purchase for $70. 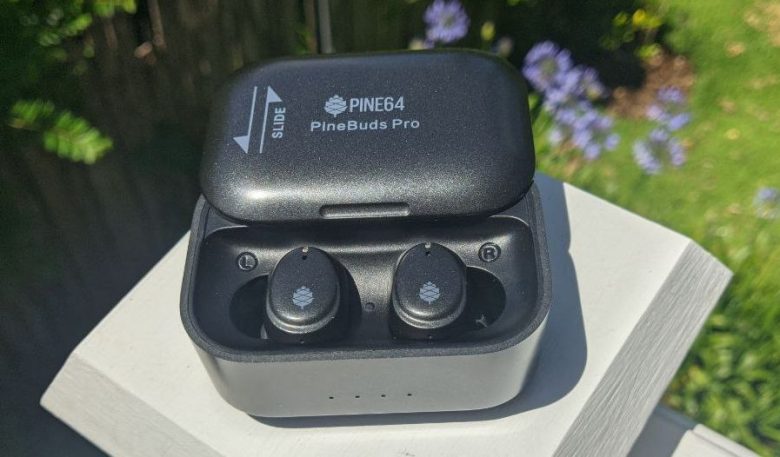 The earbuds will ship with closed-source firmware that offers basic functionality, which means that customers can use them just like any other true wireless earbuds. But independent developers are already working on custom open-source firmware that users will be able to flash when it’s available.

Pine64 says the goal is for developers to add features that may not be available in standard firmware, while giving open source enthusiasts an alternative to the many, many existing earbuds that ship with proprietary firmware that offers limited customization options, if any at all.

The company says it will also offer “an open source minimal SDK” for developers that want to build their own firmware.

Note that there are some closed-source components even in the “open” software, as some proprietary software is still required for communication with the earbud hardware.

Pine64 anticipates custom firmware that will allow users to do things like change what happens when you use the touch controls, alter audio settings or other behavior, or add new features such as turning the earbuds into hearing aids.

The earbuds feature a BES2300 processor, which is a 300 MHz dual-core ARM Cortex-M4F chip, support for Bluetooth 5.2, active noise cancellation, echo cancellation, and multi-band EQ and base enhancement, among other things. There are 3 microphones and a 6mm speaker in each earbud.

They’re rated IPX4 for water resistance, which means they’re sweat and splash-proof, but you shouldn’t take them swimming or into the shower.

Each earbud has a 40 mAh battery that Pine64 says should be good for up to 5 hours of audio play time. They come with a charging case that packs an 800 mAh battery, which should allow you to fully recharge the batteries four times before you need to plug in the case, giving you up to 25 hours of total battery life.

You can find more details in the Pine64 wiki.

This article was first published November 15th and most recently updated December 1, 2022.

via Pine64 blog and @thePine64