It’s called the Quartz64 model-A and while Pine64 hasn’t announced pricing or availability details yet, the company notes that the new single-board computer isn’t a “pro” device like the RockPro64, so it will like have a much lower starting price than that board (which sells for $60 and up).

Pine64 has also announced it’s working on another single-board PC that will be available at a later date — and it will be the team’s first mini PC powered by a RISC-V processor rather than a chip based on ARM architecture.

Despite the lower price tag, early tests suggest the Quartz64 is only about 15 to 25 percent slower than the RockPro64 “in computational tasks,” and it should be a step up from other entry-level Pine64 boards like the ROCK64 and Pine A64.

The Quartz64 model-A will be available with 2GB to 8GB of LPDDR4 memory and has optional support for 16GB to 128GB eMMC modules as well as a microSD card for removable storage and a SATA 2.0 port for external storage devices.

There’s also optional support for a wireless module with WiFi 5 and Bluetooth 5.0, a Gigabit Ethernet port, an HDMI port with support for 4K output at 60 frames per second, DSI, CSI, and MiPi interfaces, a fan connector, a real-time clock connector, a 4xPCIe slot, and  Raspberry Pi style 40-pin GPIO header.

Another nifty feature is integrated battery charging circuitry, which should allow you to power the little computer board from a battery as well as from a wall outlet.

Pine64 will also be a smaller model-B version at some point with a different set of ports and connectors. Among other things, it will ship standard with WiFi and Bluetooth, but it will have just two USB ports and no SATA port.

There are no pictures of that model yet, but Pine64 has produced a limited run of prototypes for the Quartz64 model-A board and has already shipped some units to developers. The goal is to ensure there’s at least some basic Linux support for the hardware before making it available to the general public.

But with developers already working on other hardware featuring RK3566 processors, Pine64’s Lukasz Erecinski notes that as soon as Linux is up and running on the Quartz64 boards, they should support the Panfrost open source GPU driver for hardware-accelerated video and graphics.

There are fewer details about this upcoming model, but Pine64 has explained it will be an entry-level device priced at around $15 or less, and it will have two RISC-V processors:

The C906 application processor supports Gigabit Ethernet and USB 2.0 and Erecinski says it will allow users to “create fun IoT, learning and DIY projects,” while learning to work with RISC-V architecture. 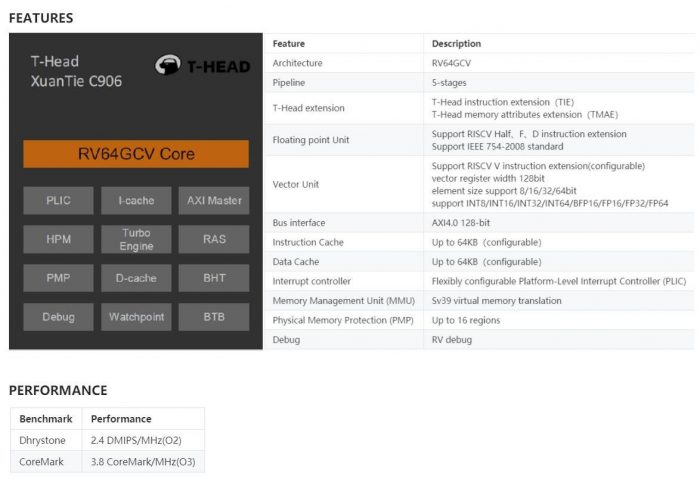