The Pimax Portal is a portable game system that tries to be a little bit of everything. At its most basic level, it’s an Android tablet with detachable game controllers. But thanks to a series of optional accessories, you can also use it as a virtual reality headset or a console that connects to a TV.

First unveiled earlier this month, the Pimax Portal is now up for pre-order through a Kickstarter crowdfunding campaign, with prices starting at $299 for an early bird, entry-level model. The Pimax Portal is expected to begin shipping to backers in January, 2023.

Pimax offers two different display options. Models with an LCD display come with a choice of 128GB or 256GB of storage, while the Pimax Portal QLED has a QLED + mini LED display and ships standard with 256GB of storage, but carriers a higher price tag.

Both versions come with detachable magnetic controllers, and both models feature WiFI 6E, Bluetooth 5.1, USB Type-C ports, 4,000 mAh batteries, proximity and gyroscopic sensors, and four cameras for position tracking (these come into play with the optional VR headset, but also work if you set up the Pimax Portal in a desktop dock across the room, since they let you use gesture-based controls). 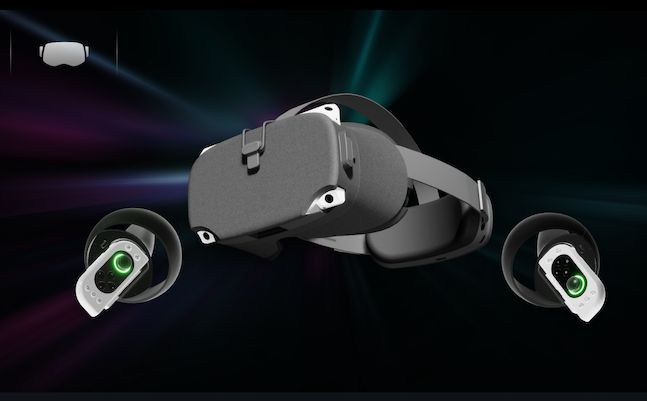 If you opt for a Portal View or Portal QLED View bundle, you also get a headset designed to let you strap the Pimax Portal to your face, with support for 60 degree, 100 degree, and 140 degree lenses, which allow you to choose between a wider field of view or sharper pixel density, depending on which you need more for a given application.

The headset also has an additional 6,000 mAh battery for additional run time (and to help balance the headset by placing weight on the back. And you can use the detachable controllers wirelessly in VR mode by placing them in a pair of circular controllers that look a bit the controllers for Meta’s Quest VR headsets.

There’s also mention of a Pimax Portal XL dock that basically lets you use the Portal in a larger case with an 8.8 inch display, but there doesn’t seem to be an option to purchase that add-on yet.

Here are crowdfunding prices for the Pimax Portal lineup: