This VR headset, first introduced at the IFA show in Berlin last month, has twin 3840 x 2160 pixel displays. Not only does that give the Pimax 8K a higher resolution than any mainstream headset on the market today, but the widescreen proportions of the displays also give you a wider range of vision, with a 200 degree field of view.

The only catch? The Pimax 8K won’t ship until early 2018, at the soonest. But you can try to reserve one by backing the Pimax Kickstarter campaign, which launched this week. 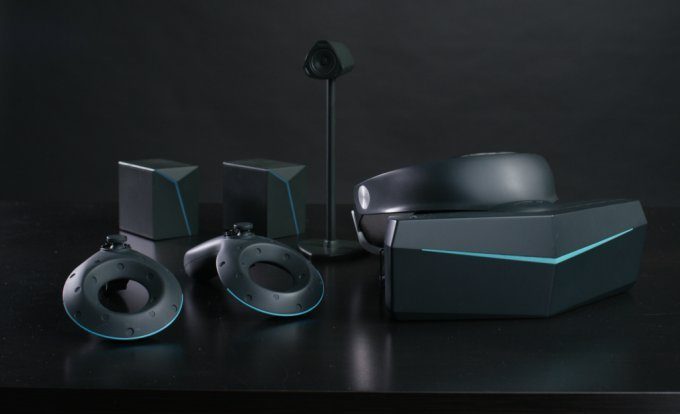 The system is said to have a low persistence display with less than 15 ms of latency, refresh rates of 75 to 90 Hz per eye, and DisplayPort 1.4, 3.5mm audio, and USB 3.0 ports for connecting to a PC, as well as an adjustable head strap.

You’ll need a pretty powerful PC to support VR graphics on two 4K displays, so Pimax suggests a system with at least 16GB of RAM, a COre i7 CPU, and NVIDIA GeForce GTX 1080 graphics for best performance.

But along with the Pimax 8K, the company is offering a cheaper, lower-res Pimax 5K headset with dual 2560 x 1440 pixel displays that should be able to run on slightly less powerful hardware, while still offering a higher field-of-view than the HTC Vive or Oculus Rift.

Early bird Kickstarter backers can reserve a Pimax 5K for a pledge of $349 or more, while the early bird backers can request a Pimax 8K for $449 and up. Those prices don’t include a base station or motion trackers though, so you’ll probably want to pledge at a higher level unless you already have compatible hardware (such as Steam VR or HTC Vive base stations/controllers).

As for the crowdfunding aspect of all this? The good news is that the campaign has already surpassed its $200k fundraising goal, which means that if you believe the rest of the company’s claims, it looks like the VR headsets should actually ship. But that’s only if everything goes according to plan… which isn’t always the case in crowdfunding campaigns launched by startups.