SUPERHOT is a popular first-person shooter from 2013 with an unusual game dynamic — time in the game only moves when you physically move your character. That gives you time to plan your next move… but not a lot of time, because as soon as you’re in motion, those bullets are going to keep flying.

PICO-8 is a “fantasy console” that lets you build or play 8-bit style games on modern devices. Each game uses just 32K of data or less, and there are PICO-8 builds available for Windows, Mac, and Linux as well as a Raspberry Pi-specific build.

Which brings us to today’s news — PICOHOT. It’s an official version of SUPERHOT that takes a modern PC game and crams the basics into a tiny, simplified package that you can play in a browser. 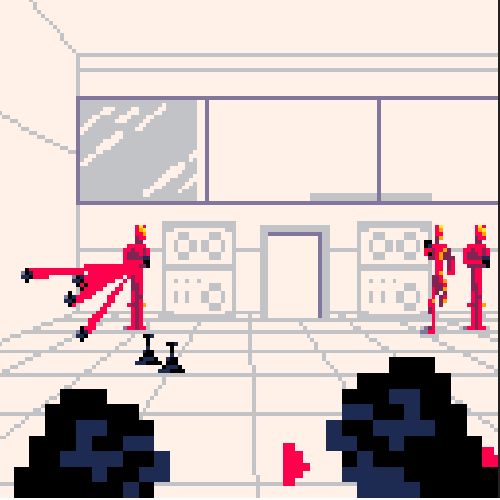 Three members of the SUPERHOT team developed PICOHOT, and while it’s not a complete port of the PC game, it is what developer Piotr Kullacalls an “homage” that captures some of the basics of the game’s look, feel, and play:

There are “a few story levels and an endless mode,” that lets you keep playing.

Personally the thing I find most interesting is that I’m much better at this version of the game than the full version. Maybe that has something to do with the simplified dynamics, or the fact that I grew up on Atari and NES games and never really got into modern 3D first-person shooter style games.

PICOHOT is available to play for free in a browser at the SUPERHOT website. You can also download the cart or view the code in a post at the PICO-8 forum.