Apple may have just launched the first iPhones to support wireless charging, but some other phone makers have been offering wireless charging features for years. Most existing solutions require you to place your phone on a charging pad or dock though… so while it’s true that you don’t need to plug anything into your phone to charge it, you do need to be very precise about where you place it if you want it to charge properly.

Pi wants to change that. The company is launching a new wireless charging system that works from up to a foot away, allowing you to charge multiple phones, tablets, or other gadgets just by placing them near a base station.

There are a few caveats though. 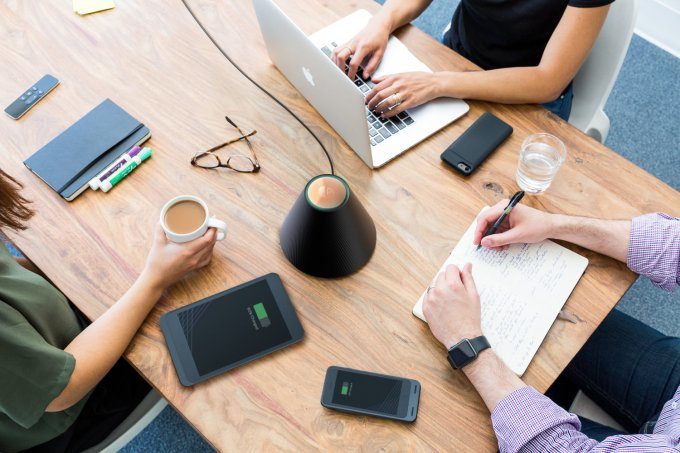 Here are the big ones:

That second issue could be temporary. If the new technology catches on, maybe we could see Pi support baked into future phones, tablets, or wearable devices. But you’ll certainly need a case to charge any gadgets that are already on the market.

Pi’s charging system uses resonant induction, much like the Qi system that’s used in the new iPhones (and most other phones that support wireless charging). But Pi also uses beam-forming to direct that energy to nearby devices to increase the distance.

In its current iteration, a Pi charger can output about 20 watts, which allows it to charge up to 4 phones simultaneously at a decent speed. Add more devices and you can still charge them all, but it’ll probably take longer. It’s possible that Pi could release a higher-powered solution in the future that would have enough juice to charge laptops or other devices that are more power-hungry than phones.

Pricing hasn’t been set yet, but when unveiling the system at TechCrunch Disrupt this week, the founder said the charger will sell for less than $200. There’s no word on how much you’ll have to pay to outfit all of your devices with Pi-ready charging cases though.

You can sign up to reserve a charger at Pi’s website if you want to be notified when they’re available.

Pi isn’t the first company to introduce a wireless-charging-at-a-distance system. I’ve been following Energous’s WattUp progress for a few years. Theoretically, that technology should be able to charge items from up to 15 feet away, although Energous expects smaller, cheaper products with much lower range to hit the market first.

But so far most commercially available wireless charging products are those that require you to place your device on or very, very close to a charging surface.