The folks at pi-top have been making Raspberry Pi accessories for a few years, including gadgets that let you turn one of the little single-board computers into a laptop or desktop computer.

The company’s latest product is called the pi-top [4] and it’s… maybe a little harder to describe than usual.

In a nutshell, it’s a modular, battery-powered mini PC powered by a Raspberry Pi 4. You can use it as a desktop or use it to build a robot, camera, drone, or other projects.

The pi-top [4] is expected to sell for $279 when it ships in November, but it’s up for pre-order for $199 and up during a Kickstarter crowdfunding campaign. 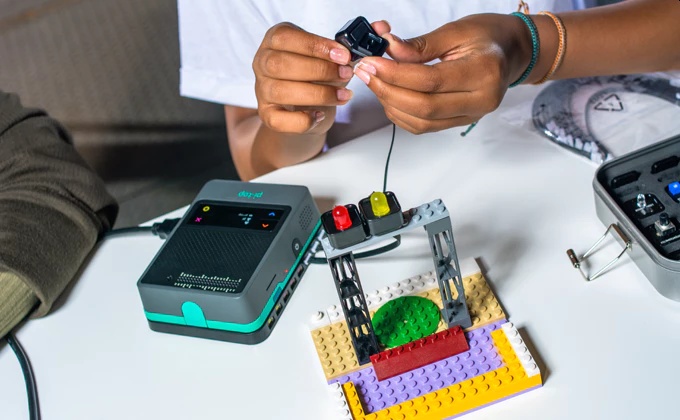 The little computer platform comes with a Raspberry Pi 4 with 4GB of RAM and a 16GB SD card for storage. It also has a small, programmable screen, a battery that’s said to be good for up to 5 hours of run time, a CPU fan, and 15 modular components including:

You can connect a keyboard, mouse, and display to use the system like a desktop computer, but you can also program it for use on the go — the small screen can display system information or you can even program it to show games that you control via the hardware buttons.

The company also offers an optional 11.6 inch 1080p touchscreen display with a detachable Bluetooth keyboard to use the pi-top [4] like a laptop.

But this isn’t just a device for folks looking for a traditional PC. It’s designed for making things — and if you need a little help figuring out what to make, you could try building a small wheeled robot by opting for the optional Advanced Vehicle Kit that comes with the hardware and software you’d need to do that.

2 replies on “pi-top [4] is a portable, modular mini PC built around a Raspberry Pi 4 (crowdfunding)”