Like your smartphone, but wish it had a tablet-sized screen? Asus offers a line of Padfone devices that let you dock your phone in a tablet-sized device to add a big touchscreen and a large battery.

But a product called the Phonepad would let you do that with phones that aren’t made by Asus. Unfortunately the Phonepad appears to be more concept than reality at the moment, but redditor ApophisXP says the device is “in production.” 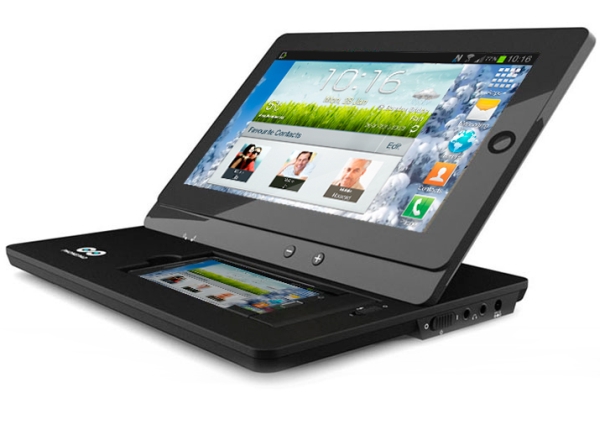 Here’s the idea behind the Phonepad: Connect your phone to an MHL port and your display will be mirrored on a 10.1 inch touchscreen display. The screen is on a special hinge that lets you use it in a few different positions:

The device features a built-in battery which reportedly provides up to 8 hours of battery life, and because your phone acts as the brains of the machine you can use it over mobile broadband without signing up for a second data contracts (or paying extra for tethering fees).

The developer also plans to offer a Bluetooth game controller with the PhonePad, letting you use it to turn your phone into a gaming system.

Overall the Phonepad seems like a nifty concept, although it’s a bit on the heavy side, weighing nearly 2 pounds. And the current design includes a 1024 x 600 pixel display, which seems pretty underwhelming. If you plan to use it with a high-end phone, your handset probably has a higher resolution display.

But the specs are subject to change, and the price hasn’t even been announced yet. So things could get better… or worse.

Update: The first Phonepad units are expected to be available in the UK in June for about £150 (which includes the wireless game controller), but the distributor tells me that most of the units from this limited production run are already reserved.