There’s no shortage of cheap, tiny desktop computers with Intel Atom processors and Windows 10 software. But the GOLE1 is a bit different.

It’s basically a tiny Windows desktop that’s small enough to slide into a pocket. But in addition to four full-sized USB ports and HDMI output, the GOLE1 has a 5 inch touchscreen display and a battery that lets you use it as a standalone device (for a little while).

The developers of GOLE1 have working prototypes, and are hoping to begin shipping devices to backers of an Indiegogo campaign starting in July. 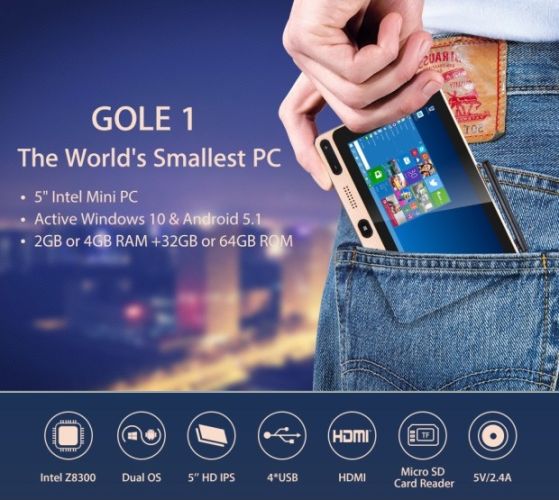 If those prices seem unreasonably low for a device which ships with Windows 10 software, it’s because the inclusion of a touchscreen essentially makes the GOLE1 a small tablet: and Microsoft allows device makers to license Windows for free for use on small phones and tablets.

No, I have no idea if it’s actually cheaper to include a touchscreen than to pay for a Windows license. That’s between Microsoft and the manufacturer. I’m also not entirely sure that this sort of device meets Microsoft’s updated hardware guidelines.

The GOLE1 also supports Android 5.1 and offers a “switch to Android” app that lets you reboot into Google’s operating system.

Anyway, here’s a run-down of the GOLE1’s hardware:

The system’s not much bigger than a typical smartphone, although it’s a bit on the chunky side. The extra space means there’s room for full-sized USB ports and an Ethernet jack, though. There’s also an external antenna and a few buttons on the front/top of the computer including volume, power, and Windows/back buttons.

There’s also an optional case that allows you to attach a 2.5 inch hard drive or SSD to the system.

Note that while the demo video for the Indiegogo campaign is produced by Charbax, of ARMDevices.net, he’s helping the company promote the campaign and isn’t involved in the production or delivery of the GOLE1.