Google Android may have been developed as a smartphone operating system (and later ported to tablets, TVs, watches, and other platforms), but over the past few years we’ve seen a number of attempts to turn it into a desktop operating system.

One of the most successful has been Remix OS, which gives Android a taskbar, start menu, and an excellent window management system. The Remix OS team has also generated a lot of buzz over the past year, and this week the operating system gained a lot of new alpha testers thanks to a downloadable version of Remix OS that you can run on many recent desktop or notebook computers.

But Remix OS isn’t the only game in town. Phoenix OS is another Android-as-desktop operating system, and while it’s still pretty rough around the edges, there are a few features that could make it a better option for some testers. 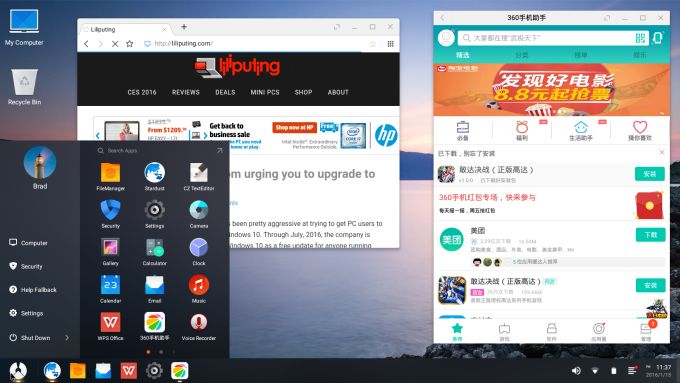 I first discovered Phoenix OS from a post in the Remix OS Google Group, although I’ve also found mentions of the operating system at the xda-developers forum, and from the makers of the UP single-board computer with an Intel Cherry Trail chip.

Phoenix OS is available as a downloadable custom ROM that you can install on a Google Nexus 9 or Nexus 10 tablet. But you can also download an x86 version that can be loaded on a USB flash drive and run on a computer.

I took the x86 version for a spin, and found that, like Remix OS for PC, Phoenix OS(x86) seems to be a heavily customized version of Android 5.1 Lollipop based on Android-x86 project code.

Update: Whoops. It does *not* support 32-bit chips. I was mistaken because the download page says the operating system is 32-bit, and it loads on an older laptop that would not work with Remix OS, but that laptop does have a 64-bit processor. When I tried Phoenix OS on a netbook with a 32-bit Intel Atom N270 processor, the operating system would not run.

Update 2: It looks like one of the first devices to ship with Phoenix OS may be the Alcatel Xess 17.3″ Android all-in-one computer.

The basic layout of Phoenix OS should be familiar to anyone that’s used Remix OS (or Windows, for that matter). There’s a taskbar and a desktop. 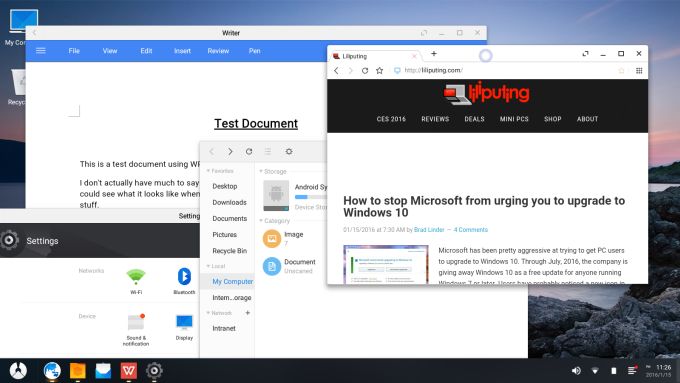 You can access a menu with a list of your apps as well as shortcuts for settings, computer information, and power options by clicking the Phoenix logo in the bottom left corner. And there are status icons on the right, including a notification icon that brings up a notification window from the right side of the screen.

The first time you launch the app menu it will run in full-screen mode, but you can tap an arrow icon to shrink it so that it just hangs out in the corner of your screen. 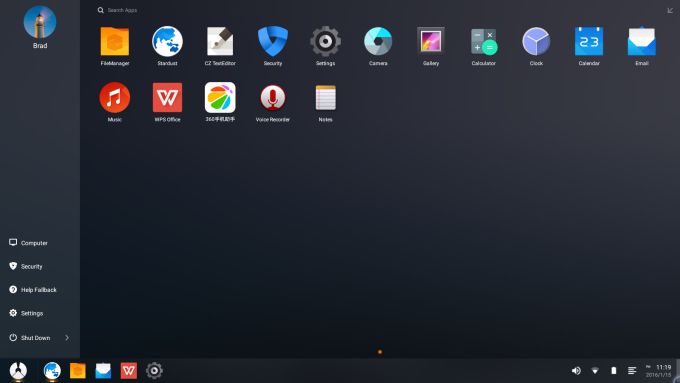 Most Android apps can be run in Phoenix OS, but instead of launching in full screen mode, they’ll typically launch in smaller windows. You can maximize most apps to have them fill the whole screen, and some apps and games will only run in this mode. But if you want to view multiple apps at once, you can do that: just drag the sides of the app until the window is the size and shape you’d like and position a bunch of windows around the screen so that you can, for instance, write a Word document while reading your email or surfing the web.

Sometimes when resizing a browser window, I noticed that text/font sizes didn’t automatically adjust to the new size, so I had to refresh the web page. And sometimes after resizing a window, I found it tricky to drag and drop that window to a new position on the screen without accidentally maximizing it. But overall the window system seems to work pretty well. 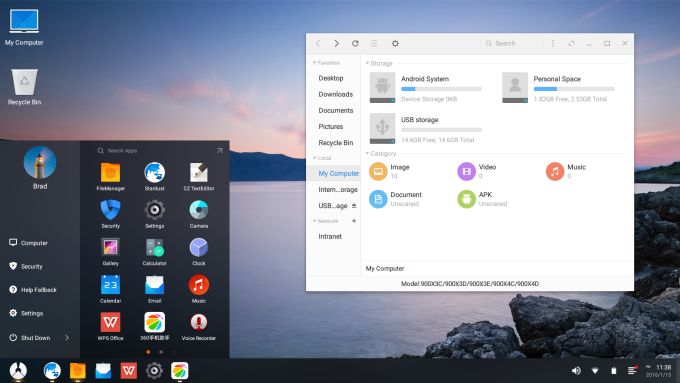 The version of Phoenix OS(x86) I downloaded does not include Google Mobile Services, so there’s no Google Play Store, Gmail, Chrome, or other Google apps. But you can easily download and install apps from third-party sources such as APK Mirror.

There’s also a Chinese app store included, but I’ve found that it can be tough to navigate if you don’t read Chinese, and some apps may not be what you think they are.

These instructions assume you’re using a Windows computer. You may need to improvise a bit if you’re using OS X or Linux.

1. Plug a USB flash drive with at least 4GB of disk space into your computer. Make sure to save any important data, since you’re going to wipe all data from the drive in step four.

4. Run USBMaker.exe and select the ZIP file you just downloaded, the drive letter for your flash drive, and then click the “write” box. 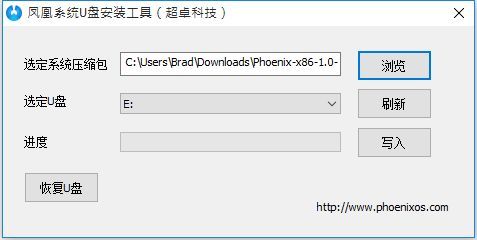 On my Samsung laptop, I hit F10 during boot to choose the flash drive. On an Asus model, I was able to do the same thing by hitting Esc. Your procedure will vary depending on your computer, and not every PC is guaranteed to work.

You might be able to get an idea of whether your system will run Phoenix OS by checking out the hardware compatibility page on the Android-x86 site.

6. The first time you run Phoenix OS you’ll probably be greeted by some Chinese characters. This is a drop-down box that lets you select your language. Just click the box and choose English if you’d prefer to change the default language.

I don’t know that much about Phoenix OS. It sure looks a lot like Remix OS, but there are a few key differences in settings manager, default file browser, and the way window management works.

At this point it seems to support a wider range of hardware than Remix OS, works with a 4GB USB flash drive (Remix recommends 8GB), and doesn’t seem to have problems running on devices with USB 2.0 ports (Remix recommends USB 3.0).

Like Remix OS, this operating system runs from a USB flash drive and doesn’t make any changes to your computer. You can pull out the flash drive and insert it into another computer and all of your apps and settings will be available. Everything runs in what Remix calls “resident mode,” which means that if you install an app or login to an account, it will all be available next time you boot into Phoenix OS.

Those features certainly go in the Pro category. 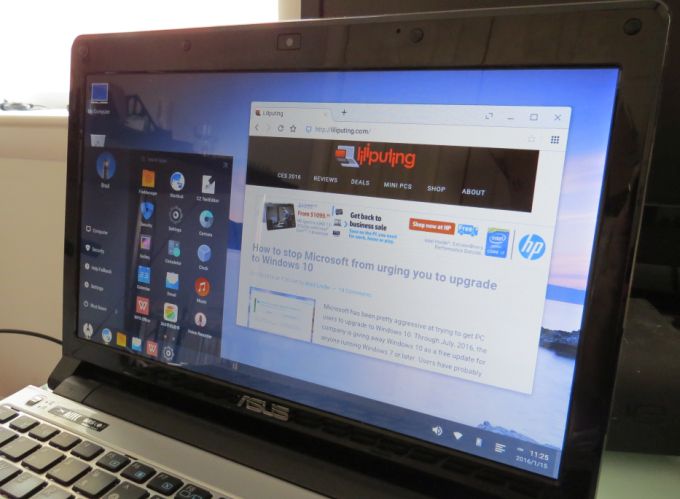 But the developers of Remix OS have released their own hardware and worked with tablet and notebook makers to release official builds of the operating system for those devices. So they’ve got a lot of expertise in this area… and the company that develops Remix OS was founded by three former Google employees who are still in touch with folks at their former employer to make sure their software is compatible with Google’s guidelines.

Given that I don’t know very much about the developers  of Phoenix OS, I wasn’t particularly anxious to try loading Google Mobile Services on the device and enter my Google account credentials. But I don’t really have a problem doing that with Remix OS.

Still, Phoenix OS definitely seems like a project worth keeping an eye on.

73 replies on “Phoenix OS is (another) Android-as-a-desktop”