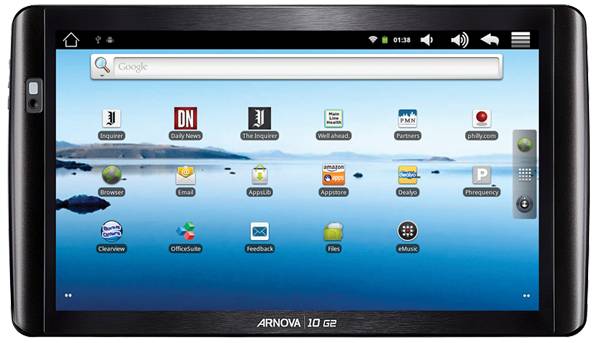 That’s the good news. The less good news? The tablet is an Archos Arnova 10 G2. This is a budget Android tablet which has been available for a few weeks, and which normally sells for around $220 and up.

In other words, you don’t actually save that much when you get the tablet from Philadelphia Media Network. In order to get the $99 price you’ll need to pay $9.99 per month for 2 years to subscribe to three digital news applications. The total cost? $338.76.

If you were planning on subscribing two all three news apps from Philadelphia Media Network anyway, this might be a good deal, but I suspect the publisher is hoping to attract customers that wouldn’t otherwise become subscribers.

As far as the Arnova 10 G2, it’s not a bad machine, as far as inexpensive Android tablets go — although in the video below you can see a little lag when the presenter tries to scroll through digital newspaper pages. The tablet’s features include:

Unfortunately, like many tablets running Android 2.3 and below, the Arnova 10 G2 doesn’t come with the Google Android Market. Fortunately there’s an active community of Archos tablet hackers that will probably get unofficial support for the Android Market working soon.

There are also a number of third party app stores where you can find software for the tablet without relying on the AppsLib market that comes preloaded on most Archos and Arnova devices.

If you were hoping the first newspaper-subsidized tablet would be a more expensive device such as a Sony Tablet S or Samsung Galaxy Tab, you’re out of luck. But I suppose it could have been worse. It could have been an Augen Gentouch78.

At launch only 5,000 tablets will be available as the newspaper publisher runs a pilot program. If the project is a success, we could see more tablets made available in the future. Update: MediaPost reports that a full scale launch could come in November.

The Tribune Company has also announced plans to offer tablets to subscribers.

Update: Technically Philly has posted an underwhelming hands-on video. The tablet seems kind of slow and unresponsive to touch-based gestures, and the digital reproductions of the newspapers don’t really look very good on the 10 inch screen.