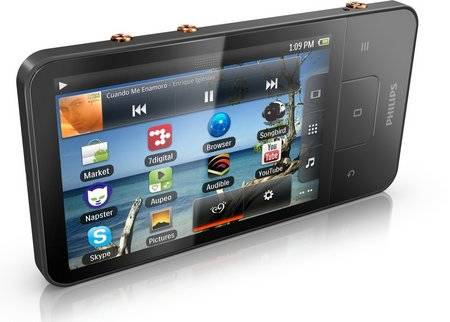 You can use the device to listen to music or watch videos, but it also ships with the Android Market for access to over 300,000 Android apps. In other words, just like the Samsung Galaxy WiFi 3.6 and Sony Walkman Mobile Entertainment Player introduced this week, the Philips GoGear Connect is sort of like an Android version of an iPod touch.

The Philips device can do a few things that an iPod touch can’t though. For instance you can share content with any DLNA capable device or stream photos or videos to a supported Philips TV screen simply by using a swiping action.

I haven’t found any details about the processor or screen resolution yet, but Philips says the GoGear Connect 3 can handle 720p HD video playback. That doesn’t mean it has a high resolution display, but it means you may be able to copy many of your videos to the device without transcoding them first.

Last I’d heard the device was slated to hit the streets this month for $179.