The folks who brought us the PengPod line of 7 and 10 inch tablets which can run Android, Ubuntu, or other Linux-based operating systems are back, and this time they want to offer an iPad-sized tablet with a high-resolution display and a quad-core processor.

While there’s already a working prototype, the PengPod1040 will only go into production if the team can raise at least $349 in pre-orders through an Indiegogo campaign. You’ll be able to reserve a tablet for a pledge of $249 (or $220 if you’re one of the first 100 people to claim an early bird special). But if the campaign doesn’t reach its goal no money will be charged. 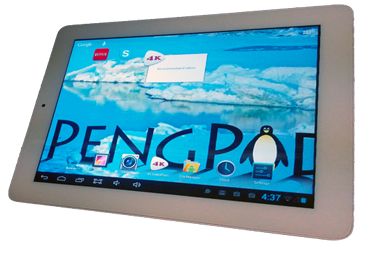 The PengPod1040 features a 9.7 inch, 2048 x 1536 pixel display, an Allwinner A31 ARM Cortex-A7 quad-core processor, 2GB of RAM, 16GB of storage, and it’s expected to ship with both Android and Ubuntu loaded to internal storage. You’ll be able to choose between operating systems at each boot.

The two operating systems will share a storage partition with around 11 or 12 gigabytes of space. That way if someone emails you a document or presentation you can save it to your device in Android, reboot into Linux and run LibreOffice or another office app to edit it. Or if you’re using Ubuntu and want to watch Netflix or use Skype, you can reboot into Android to do that.

PengPod’s earlier tablets shipped with Allwinner A10 ARM Cortex-A8 single-core processors and Google Android software. If you wanted to run another operating system you had to load it on a microSD card. They also didn’t exactly receive glowing reviews at launch, but the new model has a faster processor, more memory, and a better display.

I haven’t been particularly impressed with the performance of the Allwinner A31 processor, but it is significantly faster than the single-core A10 chip. More importantly, PengPod’s developers says Allwinner has been pretty good about providing the source code and documentation needed to get GNU/Linux working on devices with the quad-core processor.

There’s even some support for 3D graphics and HD video playback in Linux using the PowerVR graphics chip.

The team did look at other processor options, but ruled out MediaTek and Rockhip processors due to limited documentation. Freescale offers plenty of documentation for its i.MX6 processors, but they cost more than Allwinner chips, and they aren’t nearly as popular with Chinese manufacturers for that reason.

Since the developers already had experience working with Allwinner chips for their earlier tablets, they decided to go with the Allwinner A31.

While 7 inch Android tablets seem to be doing better in the marketplace these days, PengPod says it sold two 10 inch tablets for every 7 inch model sold during its initial run. That’s why the developers are only offering a 10 inch model as part of the new campaign.

It costs more to build this new model, and they figured they had a better chance of meeting the minimum order requirements with the 10 inch model. If there’s enough demand, they could try another campaign for a 7 inch version.

At $249, the 10 inch PengPod1040 would still be cheaper than many 7 inch Android tablets, and thanks to support for Ubuntu, Fedora, and other operating systems, it could prove to be more versatile.

The new Indiegogo campaign will run for 35 days, and if successful, the PengPod1040 could ship by the end of the year.