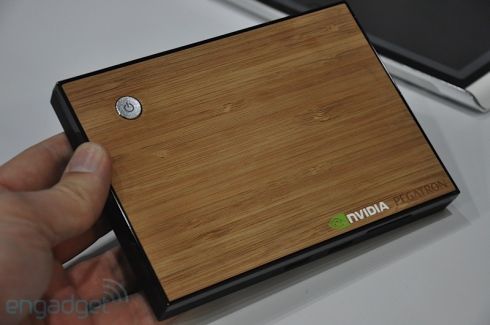 Who says you need an x86 compatible processor to create a home theater PC? No, seriously, who? I mean, I tend to think of desktop apps like Windows Media Center SageTV, Boxee, or MythTV when I think of media centers… but three out of four of those apps will run on Linux. And you can run Linux on a system with a low power ARM-based procesor.

And Pegatron is showing off just such a system, with a next generation NVIDIA Tegra chipset which combines an ARM CPU with NVIDIA graphics to enable support for 1080p HD video playback. It can handle high definition Flash video as well.

This particular model is designed to run Windows CE or Google Android. But there’s no reason you couldn’t essentially turn it into a Boxee Boxx (minus the awkwardly shaped case) by loading up a Linux distribution and installing the Boxee Linux client.