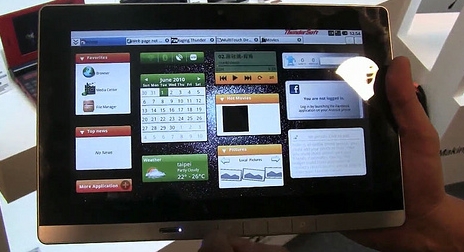 Just because a tablet is running Google Android doesn’t mean it has to look like it’s running Android. After all, HTC has made a habit of shipping Android Smartphones with the custom HTC Sense user interface running on top of Android. And now Sascha from Netbook News.de found a tablet prototype that runs Android with a tablet-friendly UI slapped on top.

The tablet is a prototype from Asus subsidiary Pegatron, and it has a 10 inch display, Freescale ARM-based processor, HSMI output, a SIM card slot, USB port, and mic and headphone jacks.

You can find Sascha’s video after the break, but if you don’t speak German you might not need to turn the audio up.

The most interesting thing about the tablet is the custom user interface which places a series of widgets on the home screen allowing you to see a calendar, launch a media player, see the local weather, or updates from social networking sites.

On the one hand, it looks a little overly crowded. On the other hand, it’s nice to see that someone finally realized that tablets have large screens than smartphones and it makes sense to customize the Android Home Screen to take advantage of the extra space.