The Pebble Time smartwatch has already smashed a few Kickstarter records this week, showing there’s plenty of demand for the company’s first watch with a color display. Part of the appeal of Pebble’s watches is that they have always-on displays and up to a week of battery life. But another part of the appeal is that they’re not tied to a single platform: you can use a Pebble watch with Android or iOS.

Soon you may be able to use them with Windows Phone devices as well.

Update: Or maybe not (see below). 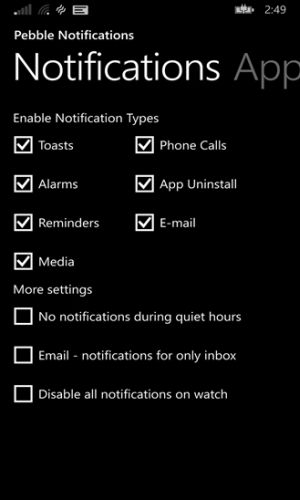 The app appears to be developed for internal testing and isn’t available to the general public yet. But it does provide a few clues about how Pebble watches could work with Windows Phone in the future.

Update: According to an investigation by Windows Central, Microsoft built the app as part of an effort to work with Pebble… but Pebble management has shown little interest in officially supporting Windows phones so it’s unclear if the app or any official Pebble app will be made public.

Apple, Google, and Samsung all have their own smartwatch platforms, but you generally need to pair your watch with an iOS, Android, or Samsung phone in order to receive notifications. Pebble, on the other hand, just requires you to install a companion app on your Android or iOS device and if this internal test application is anything to go by, it looks like Microsoft may be testing its own app which would let you use a Pebble with Windows handsets in the future.