Smart watches may be the biggest thing in geeky wrist accessories since watches with tiny calculators built in. For over a decade companies have been pitching watches that can run apps or widgets, connect to the internet, and do more than just tell time. But they haven’t really taken off.

Now Motorola and Sony are both offering watches that can be paired with an Android phone so that you can view incoming calls, control music playback, and run some apps on a tiny screen.

So we know there’s supply. But what about demand? If the success of a new Kickstarter project for the Pebble smart watch is anything to go by, it looks like plenty of people are ready to spend some cash on a tiny wearable computer. 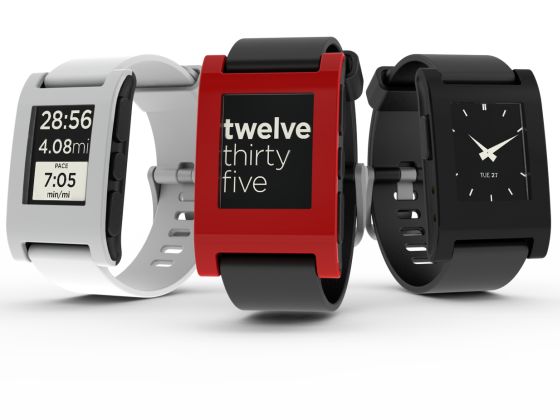 The Pebble has a 144 x 168 pixel E-Paper display which is much easier to see in direct sunlight than most LCD displays. It also uses less power, which is why the developers say the watch can run for 7 days or longer on a single battery charge, without the screen going dim or turning off.

It also has a backlight that you can turn on if you want to see the screen at night.

You can use the watch just to tell the time. But things get much more interesting when you pair it with an iPhone or Android phone over Bluetooth. Then you can use it to view text messages, see information about incoming calls, control media playback, or install a range of apps including software that lets runners or cyclists keep track their times using a phone’s GPS receiver and the Pebble’s display.

The watch has an accelerometer, vibrating motor, and several buttons. You can install apps over Bluetooth by downloading them from a Pebble app store.

You can also view weather alerts, Facebook or Twitter messages, email updates, or calendar alerts on the watch.

The project comes from the folks that designed the inPulse smart watch for use with some BlackBerry and Android phones. But the new model supports more Android devices and it’s the first to work with the iPHone.

It also has more storage space and memory than the inPulse watch.

The developers have already built prototypes of the watch, but they took to Kickstarter to raise money to begin production. They originally wanted to raise $100,000, but in just a few days more than 20,000 people pledged more than $3,000,000, prompting the team to promise to make the watch waterproof.

A basic black Pebble is going for a Kickstarter pledge of $115. Higher donations can get you different colors, multiple devices, or early prototypes for development purposes.

6 replies on “Pebble $115 E-Paper watch will sync with iPhone, Android”