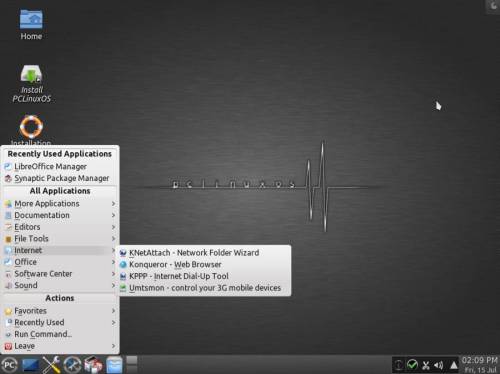 Last month the latest version of PCLinuxOS hit the scene. It’s a user-friendly Linux distribution designed to run on computers with older hardware or modern systems. The minimum system requirements are just 512MB of RAM and 3GB of disk space, making PCLinuxOS a good choice for older netbooks.

Now the developer has launched an even lighter-weight operating system called PCLinuxOS KDE MiniMe 2011.07. The name is a bit of a mouthful, but basically the MiniMe edition is a stripped down version of PCLinuxOS which provides you an operating system and little else. You can use the configuration tools to download and install web browsers, media players, communications software or other apps.

You do get some basic apps that come with the KDE desktop environment. For instance the Konqurer web browser and Dolphin File Manager. But if you want Firefox, Pidgin, GIMP, or any other popular open source apps you’re going to have to download them yourself. This lets you configure the OS just the way you like it — without having to uninstall a bunch of apps you don’t want or need first.

The result is a disk image that’s just 460 MB compared with the 699MB ISO file you have to download to run the full version of PCLinuxOS KDE.

The operating system does include support for 3D desktop graphics on computers with most Intel, NVIDIA, or AMD graphics cards.