The PCI Special Interest Group (SIG) has finalized the PCIe 6.0 specification which will allow next-gen SSDs, graphics cards, and other PC and server components to offer data transfer speeds as high as 256GB/s in a full 16-lane configuration.

That’s twice as fast as PCIe 5.0 and four times as fast as PCIe 4.0, which is still far more commonly used today. But it might be a few years before you can actually buy a computer that supports the standard.

It’s been three years since the PCIe 5.0 standard was announced, and companies are just now starting to introduce SSDs and other hardware that uses that standard. And they’ll only work with desktop or server computers, because all of those brand new mobile chips Intel and AMD just introduced earlier this month? None of them support PCIe 5.0 yet, which means that for the foreseeable future, laptops will be limited to PCIe 4.0 or older.

So yeah, it’ll probably be a while before you can buy a computer with PCIe 6.0 support.

But when it does arrive, you can expect blazing fast speeds… although just how fast will depend on your setup. Expect up to 256GB/s for a bi-directional 16-lane setup or 128GB/s for single-direction. But some systems might only support 8 lanes, 4 lanes, 2 lanes, or just one. Cut the speeds in half every time you half the number of lanes. 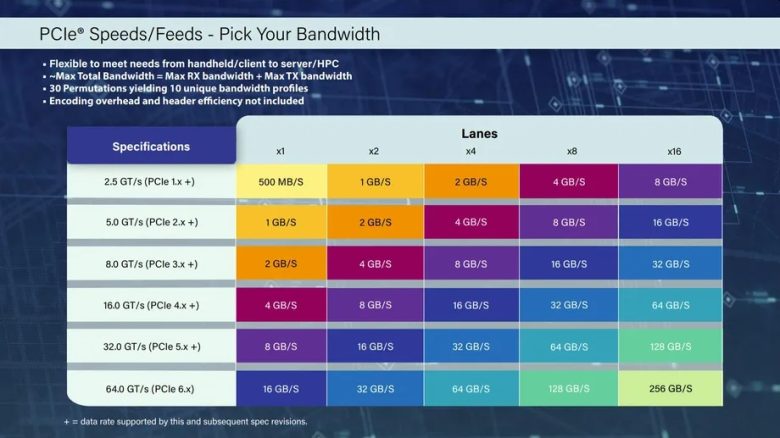 The PCI SIG says in order to double the speeds of PCIe 5.0, the new standard uses a new PAM4 signaling technology for greater bandwidth and efficiency with low latency. The architecture remains backward-compatible though, which means you could still use SSDs or other components designed to meet earlier PCIe standards.

The folks at Anandtech have a deep dive into the technical details if you’re interested, or you can check out the PCI SIG website for more information.

via Ars Technica, The Verge, and Tom’s Hardware

One reply on “PCI Express 6.0 will bring up to 256GB/s bandwidth to PCs and servers… eventually”