The pcDuino is a single-board computer that looks a bit like a Raspberry Pi. But it’s got a faster processor and more memory than a $25 Raspberry Pi, plus a whole lot of extra connection options.

Not only does the pcDuino include Ethernet, WiFi, and HDMI ports, but it also has Arduino-compatible headers, which means you can tack on Arduino shields to add Bluetooth, GPS, cellular capabilities, touchscreens, or other hardware.

You can pick up a pcDuino board for about $59. 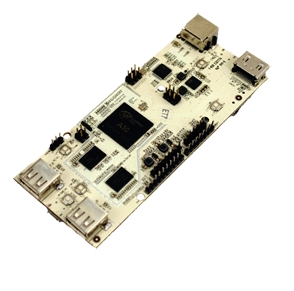 For that price, you get a PC board with a 1 GHz Allwinner A10 ARM Cortex-A8 processor, Mali 400 graphics, 1GB of RAM, and 2GB of storage. The device has an SD card slot for additional storage, USB and HDMI ports, and UART, GPIO, and other interfaces which you can use to connect additional hardware.

The pcDuino can be used as a simple computer capable of running Android 4.0 or Ubuntu 12.10 software. Like other devices with Allwinner A10 processors, while you can run Ubuntu Linux on the pcDuino, you won’t have hardware-accelerated graphics, which could affect video playback and 3D graphics performance.

But there are plenty of devices with faster processors, more storage, and cases that will do that (the pcDuino ships as a single board PC without a protective case). What makes this device special is the support for Arduino shields, which means the pcDuino can be used as a hardware prototyping device that packs a little more punch than a typical Arduino board.

If you want to try to save a few bucks, you can also try bidding on a pcDuino board on eBay, where you may be able to pick one up for less than the $59 asking price.