Research firms Gartner and IDC both released reports this week looking at PC shipments in the fourth quarter of 2014. While the reports don’t quite agree on the exact numbers of PCs shipped, they do both suggest one thing: things aren’t look as bad as they had been for the past few quarters.

According to Gartner, there was a 1 percent increase in shipments over the same period a year ago. IDC calculated a 2.4 percent decline… but says that was lower than the 4.8 percent decline that had been expected.

Both reports suggest Lenovo shipped more computers than any other company, followed by HP, Dell, and Acer. There seems to be a bit of dispute over which company came in 5th place, but it’s either Asus or Apple. 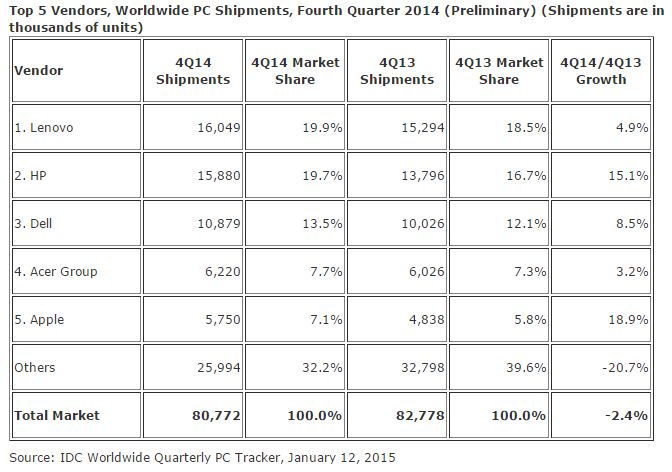 The reports agree that the growing number of low-cost systems including notebooks priced at $200 to $300 helped stem the decline in PC shipments.

But it’s also worth noting that these reports track shipments, not sales — it’s possible that many of the devices PC makers shipped to stores are still sitting unsold on the shelves.

Analysts also suggest that tablet shipments might have peaked in 2013 — and that people are now turning back to notebooks and other PCs. This doesn’t necessarily mean they’re dissatisfied with tablets, but it could mean tablet owners still prefer a traditional PC for some activities, and that they don’t feel the need to replace their existing tablets very often.