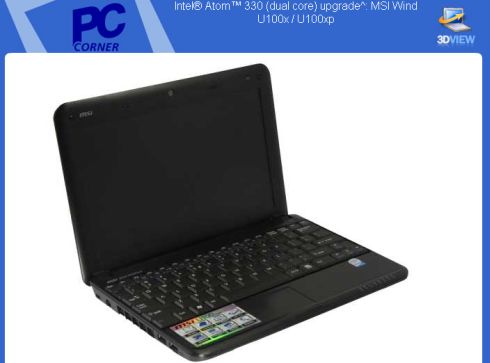 The other day a Microsoft employee giving a presentation at WinHEC accidentally suggested that the Asus Eee PC S101 has a dual core Intel Atom processor. But the truth of the matter is that while Intel has developed a dual core version of the Atom chip, it’s meant for desktops or larger laptops. Not netbooks. The dual core Atom 330 CPU generates too much heat and it’s larger than the Intel Atom N270 CPU used in many netbooks today.

Apparently at least one computer retailer didn’t get the memo. Because Philippine computer shop PC Corner is offering dual core CPU upgrades for the Asus Eee PC 1000H and the MSI Wind U100. The company says it will upgrade the computers by replacing the Atom N270 processor with an Atom 330 CPU. In order to accomodate the new processor, the company has to replace the computer chassis, which will cost extra. It’s not clear exactly how the new chassis will differ from the existing model. Is it bigger? Better ventilated?

The web page is a little confusing, since it also mentions the possibility that computer manufacturers might release their own upgraded models with the Atom 330 CPU. Last I heard, that wasn’t going to happen. Intel may eventually come out with a dual core CPU for netbooks, but the Atom 330 isn’t it. I wrote to PC Corner to ask if they’re actually upgrading the the CPU and chassis, and this is the reply I got:

If I’m reading that right, that means the upgrade will cost about 8,000PhP or $166 US. But I’d still want a few more details before sending in my netbook for an upgrade.