Small replicas of classic game systems have become surprisingly common over the past year or two. First there was the NES Classic. Then came the SNES Classic, the C64 Mini, the Neo Geo Mini, and the PlayStation Classic.

But what about one of the most popular gaming devices ever? The PC? 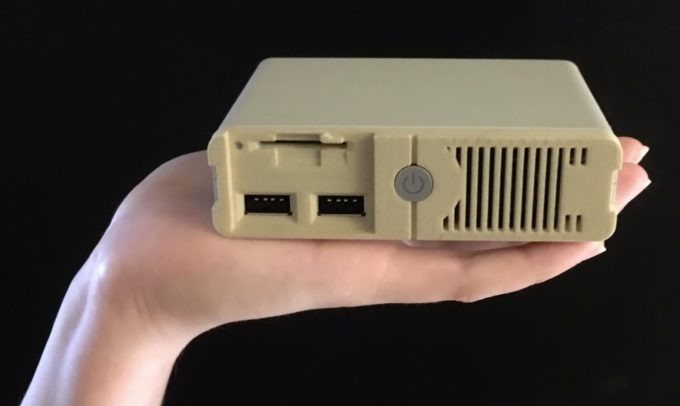 A small gaming company called Unit-e has developed a working prototype and plans to launch a crowdfunding campaign for the PC Classic in late November or early December in hopes of shipping the device to backers in spring or fall of 2019.

The system is small enough to hold in the palm of your hand, but it’s designed to look like a tiny version of a classic computer and it will run games developed for MS-DOS.

Unite-e says the system supports joystick and keyboard-and-mouse input, and it’ll likely ship with at least one joystick.

There are three USB ports (two on the front and one on the back), composite and HDMI ports for connecting old-school or modern TVs or monitors, and an SD card slot for removable storage. The system also supports Bluetooth.

Ultimately, like other “classic” and “mini” consoles, this is the sort of device you could probably just set up yourself by installing DOSBox on a Raspberry Pi.

But the advantage of buying a system like the PC Classic is that you get a device that will ship with “at least 30 games,” and which is pre-configured to work without any tinkering. Just plug it into your TV and you can play classic games from the 80s and 90s in your living room.

It also has a cute case (in a retro aesthetic kind of way), and the company plans to work with game developers so that the PC Classic comes with licensed versions of those old-school games rather than the bootleg versions you’d probably end up running on a home-built system.

One thing that sets the PC Classic apart from most of the other mini retro consoles we’ve seen recently is that you’re not limited to running the games that come with the device. Unite-e hopes to sell SD cards with additional games on them.

You know, assuming they can raise enough money through crowdfunding to turn the idea into reality — licensing games and designing custom case molds aren’t cheap endeavors.