Google offers tools that let Android developers collect payment for in-app purchases using Google Checkout. But now developers that want to let users make payments using a credit card or PayPal can offer that option, thanks to a new Android SDK from PayPal. 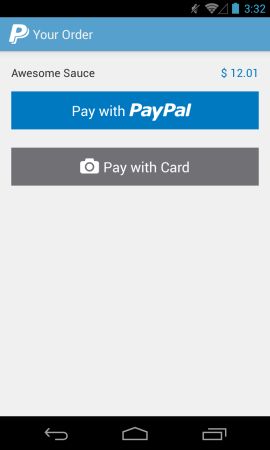 PayPal says the SDK supports Android 2.2 or later, which should cover the vast majority of Android devices in the wild.

While there are millions of folks that have PayPal accounts which they use to purchase goods and services online, what might be even cooler is the ability to collect payments from major credit cards without going through Google Checkout.

Also, since developers can integrate the payment feature directly into their apps, users will be able to complete a transaction without leaving the app.

While there’s no mention of transaction fees in PayPal’s launch announcement for the new SDK, the developer portal mentions a fee of $0.30 plus 2.9% for transactions made using REST APIs. If the mobile system is similar, then PayPal will actually collect more money than Google for transactions of $1.00 or less, but for larger purchases, app developers might be able to keep a higher cut of the money, since Google takes a 30% cut.

So PayPal might be a good option for developers looking to charge monthly or annual subscription fees for music services, magazines, or related content, for instance.

Unfortunately, it looks like including PayPal integration in an app could violate the Google Play Store terms, which means you might only be able to use PayPal for in-app purchases in apps distributed outside the Play Store.