Google rolled out a new “immersive mode” feature with Android 4.4 KitKat. Apps that take advantage of it can run in full-screen mode, eliminating the notification bar and on-screen buttons and allowing you to bring them back with a gesture.

But app developers have to tap into Google’s API to fully take advantage of Google’s immersive mode.

Apparently that wasn’t good enough for the developers of Paranoid Android, because they’ve decided to build a universal immersive mode. It’s designed to work with all of your apps — and even the home screen on your phone or tablet. 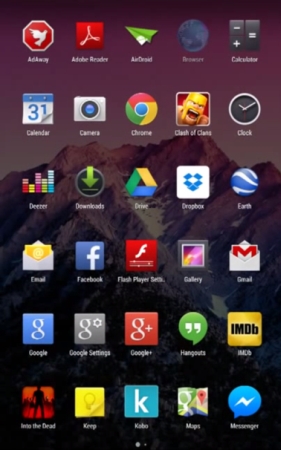 Paranoid Android is a custom version of ROM designed to replace the software that came with your Android phone and tablet, and the developers are known for offering tools that change the way you interact with everything from the settings panel to notifications.

The next major release will be Paranoid Android 4.0, and immersive mode will be baked in, as well as a new Quick Settings panel which allows you to re-arrange tiles by dragging and dropping them. It’ll also be the first build of Paranoid Android based on Android 4.4 KitKat.

That’s the good news. The bad news is that it might be a little while before Paranoid Android 4.0 is ready to download — the developers recently announced that they’re scrapping their earlier code and starting over from scratch. The software will be a freshly modified version of Google’s Android Open Source Project code rather than a simple update from Paranoid Android 3.9.9.