Ever wish your phone had more than one display? How about three? A team from Queen’s University’s Human Media Lab are showing off a working prototype of a multi-screen, foldable smartphone that lets you add or remove screens as needed.

It’s called PaperFold, and it just a multi-display concept. It’s also a shape-changer.

The idea is that you can add or detach screens as needed, and fold the system into different shapes depending on your needs.

For instance, you can use the device as a single-screen smartphone, and then attach a second display and prop up the PaperFold like a laptop to use a virtual keyboard on one screen while continuing to view content on the other. Fold the screens flat and the keyboard disappears while content like a map spreads across the screens.

You can use up to three screens with the device, and arrange them like a book, laptop, or a triangle… if that’s the sort of shape you’re likely to need. 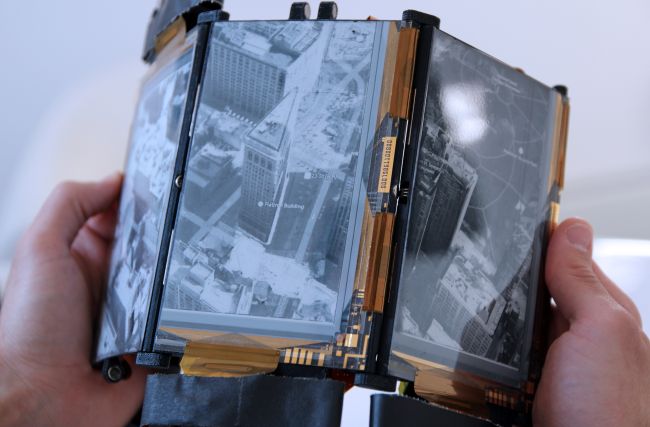 Each screen has a flexible ePaper display from Plastic Logic, and they can act as independent displays or work together. The screens automatically detect when they’re connected to one another via a magnetic hinge and change their function appropriately.

Right now PaperFold appears to be a rather rough-around-the-edges prototype. But is’ one of the more interesting smartphone concepts I’ve seen in a while… and the team gets extra points for actually developing a working prototype instead of a series of drawings.