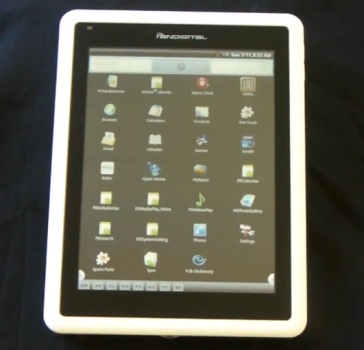 At $179, the Pandigital Novel might not be the cheapest eBook reader around. But it’s definitely one of the cheapest general purpose Android tablets available in the US… even if that isn’t how the company is marketing the device.

Thing is, it has a 7 inch, color touchscreen display and runs Google Android. All you have to do is figure out how to get past the custom software interface Pandigital throws on the Novel and you can install third party apps — including the Amazon Kindle app, Aldiko, or other eBook apps. You can even install games, media players, or just about anything else you can run on an Android tablet.

A few weeks ago we saw the first evidence of hackers gaining root access to the device. Now it looks like there’s a whole heck of a lot more you can do with the Novel — even without rooting it first.

There are a few catches. Right now there’s no way to access the Google Android Market, which means you’ll have to manually download apk installer files for each app you install. And you’ll need to apply a few hacks to get things working properly. That includes installing a third party home screen so you have access to the program launcher and a hack that lets you use the volume buttons as if they were Menu and Back buttons — since the Novel doesn’t actually have dedicated buttons for those frequently-used Android functions.

You can find instructions for hacking the Pandigital Novel at The Digital Reader, as well as the SlateDroid forums. The video below shows some of the things you can do with the tablet once you start hacking. Bear in mind, the Pandigital Novel has a relatively sluggish CPU which was really just meant to power an eBook reader, so don’t be surprised if some of the animations and other visual elements look a bit slow.