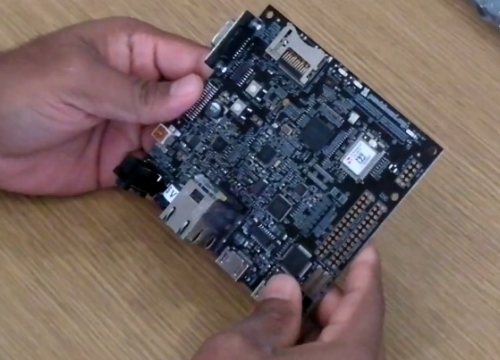 The PandaBoard ES is a platform aimed at developers that want to write software for phones, tablets and other mobile devices. But basically it’s a tiny, low-cost computer board with a 1.2 GHz TI OMAP 4460 dual core processor, support for 1080p HD video, HDMI output, OpenGL 2.0 graphics, and more.

The PandaBoard ES has 1GB of DDR2 memory, a full-sized SD card slot for storage, a 3.5mm audio jack, Etehernet, WiFi, Bluetooth and USB. It measures 4.5″ a 4″ and weighs less than 3 ounces.

Phoronix decided to test the performance of the PandaBoard ES, and instead of pitting it against smartphone systems, Phoronix compared the overall performance to computers running Intel Atom, Pentium M, and Core duo processors.

Not surprisingly, the systems with x86 chips came out well ahead in most tests… but not all tests. The PandaBoard ES with its OMAP processor certainly didn’t embarrass itself.

The system can handle the ARM version of the Ubuntu Linux operating system, and the Phoronix benchmarks show that low power ARM-based processors are becoming viable alternatives to x86 chips for at least some low-power computing purposes.

You can pick up a PandaBoard ES for $182, but it’s really aimed at developers rather than end users.