If those prices seem kind of steep… well, they are. But Panasonic isn’t positioning the Toughpad FZ-M1 as a consumer device. Instead it’s a portable device for professionals to use while in the field… no matter what kind of field that is. 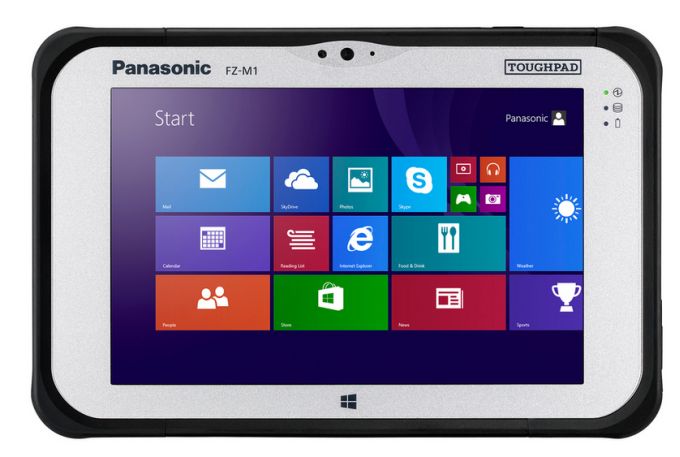 The ToughPad FZ-M1 has a rugged, shock-resistant case that can handle vibration, humidity, extreme temperatures, and more. It meets the MIL-STD-810G standard for drops up to 5 feet, and it’s rated IP65 for water and dust resistance. It has a fully sealed case and a fanless design.

For use in outdoor environments, the tablet has a 7 inch, 1280 x 800 pixel sunlight readable screen with wide viewing angles and “strengthened glas.”

Prices start at $1299 for a model with an Intel Celeron N2807 Bay trail processor or $2099 for a version with a Core i5 Haswell CPU. The base model features 4GB of RAM and 64GB of solid state storage. 128GB and 256GB options are also available as well as up to 8GB of RAM.

The built-in battery should provide up to 8 hours of run time, and Pansonic offers an optional high capacity battery for up to 16 hours of battery life.

The tablet measures about 0.71 inches thick and weighs 1.2 pounds, making it kind of heavy for a 7 inch tablet… but that’s the price you pay for something this sturdy. Well, that, and a lot of money. That’s the other price.

Panasonic covers the Toughpad FZ-M1 with a 3-year warranty and the cheaper version of the tablet will ship later this month with Microsoft Windows 8.1 with Bing software… which basically means that despite all the premium features, Panasonic went with the version of Windows for small tablets that has no licensing fee.